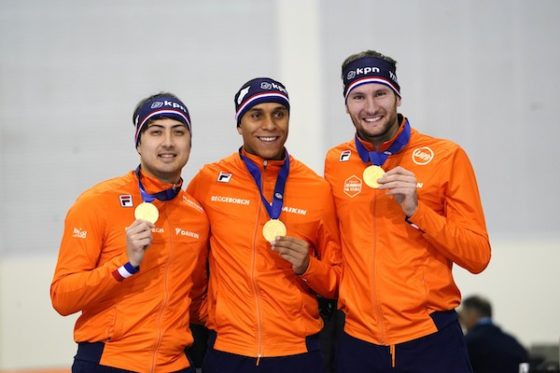 In the men’s event, Kai Verbij , Dai Dai Ntab and Thomas Krol took gold after the Canadian men’s team was disqualified for a wrong changeover. Russia too had been a favourite, but a fall by 500m title favourite Pavel Kulizhnikov put them out of the running.

The women’s team of Femke Kok, Jutta Leerdam and Letitia de Jong completed the race in 1.24.02. Russia took silver and Poland the bronze in the field of just four teams. The sprint event was only introduced last year.

In the 5,000 metres, Canada’s Ted-Jan Bloemen took the 5,000m, beating the Netherlands 2018 champion Sven Kramer into the silver position by 0.54 of a second. Canada’s Graeme Fish was third.

Kramer, who has been beset by a back problems this season, said the result was bitter, yet he was also proud of what he had accomplished, given his injuries.

The Netherlands has topped the medal standings at every Olympic and world speed skating champions dating back to 2002 and has high hopes of a repeat performance this year. The event finishes on Sunday.