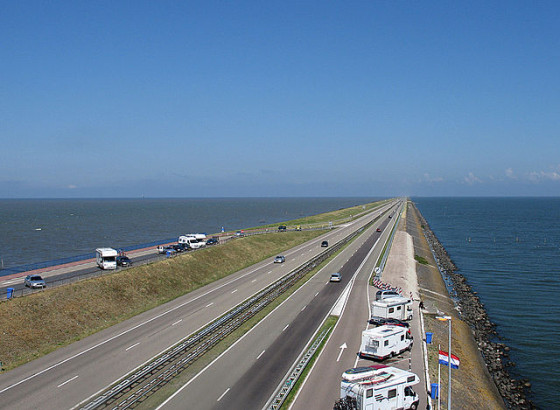 The Afsluitdijk had a major impact on the marine environment. Photo: Roobit via Wikimedia Commons

A scheme to build two giant dams in the North Sea to ward off rising sea levels caused by global warming could protect some 25 million Europeans from devastating floods, Dutch-Swedish research shows.

Although the project would be technically feasible and would ‘only’ cost 0.1% of the countries protected by the dams GDP over 20 years, it is intended as ‘a doom scenario, a warning of what we are heading for,’ oceanographer Sjoerd Groeskam said.

‘It’s the last thing we actually want to do because of the immense consequences for nature, the maritime industry and many other things,’ he said. ‘The best thing is to reduce climate change to a minimum.’

However, should the worst come to the worst, Groeskam and his Swedish colleague Joakim Kjellson have calculated the Northern European Enclosure Dam could be instrumental in saving the lives, but not the livelihoods of Europeans.

‘The dams, one between Scotland and Norway and one between France and the southwest of England, would make the tides disappear and eventually turn the North Sea into a fresh water lake, and nature and the fishery industry would undergo a major change,’ Groeskamp said.

The technical side would be patterned on technology used to build oil platforms at great depths, the scientists said. To get to an estimate of the costs – between €250bn and €500bn – they looked at the finance involved in huge dam building projects in South Korea. ‘You also have to take into account the cost of revenue loss from fishing and shipping and costs for pumping out river water,’ Groeskamp said.

The project, which will be published in the American Meterological Journal next month, is a serious warning to make sure it never has to come to this, Groeskamp said.

‘The cost and the consequences of a project like this are huge. But the costs of doing nothing will be higher still. This dam shows what the consequences of the most pessimistic forecasts about rising sea levels will be: 10 metres by 2500. This dam is a call to action. If we do not stop climate change now, we may well have to build the dam after all.’

So far the attempt by the scientists to raise awareness has resulted in a flurry of international press attention, including the Guardian and the Daily Mail.