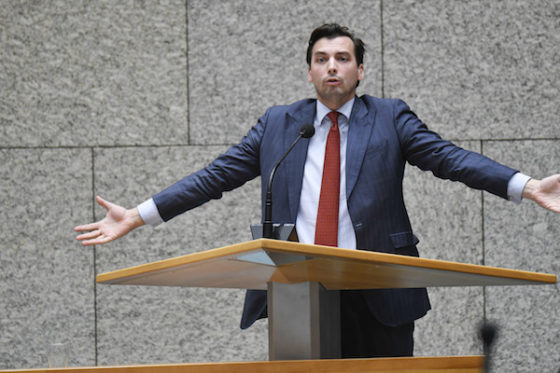 Thierry Baudet, the leader of Dutch nationalist party Forum voor Democratie, has said he plans to take a television station to court for spreading ‘scandalous lies’ about statements he made in parliament.

The comments were made by television presenter Natalie Righton in Sunday current affairs show Buitenhof in an interview with former FvD stalwart Henk Otten.

During the interview, Righton asked Otten what he thought about Baudet’s statement that ‘the EU had a master plan to replace the white European race by African immigrants’, referring to comments he had made in parliament the previous week.

Baudet quickly circulated a message on Twitter calling on the VPRO to retract the statement or face a court case. He also added a transcription of part of the parliamentary debate in question as proof the presenter had lied, but not the section referred to by Righton.

Buitenhof has said it sees no reason to rectify Righton’s comments and that she had correctly paraphrased the FvD founder.

During the debate with Labour leader Lodewijk Asscher, Baudet said that money which goes to the EU is being used to ‘set up ferry services to bring immigrants from Africa to Europe to weaken national identities so that there are no longer any nation states’.

Later in the debate Baudet stated again that the aim of the EU is ‘multiculturalism, the aim is to weaken the traditional European identities’. ‘I am convinced that the idea is to weaken the nation state by mass immigration,’ Baudet said.

At the time, Baudet’s comments led deputy prime minister Hugo de Jonge to describe the statements as ‘radical’, and to urge everyone to distance themselves from them.’