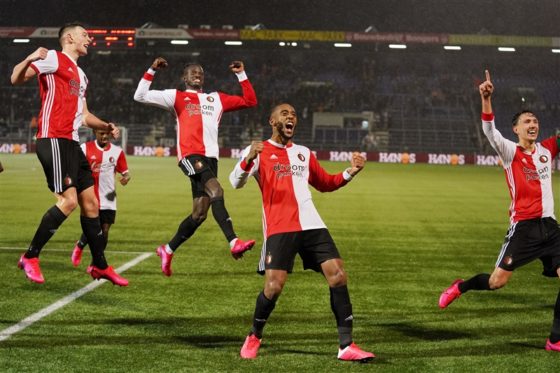 Ajax stretched the gap at the top of the Eredivisie to six points with a routine victory over bottom club RKC Waalwijk as AZ Alkmaar suffered their third defeat in five league matches.

The champions went ahead in Amsterdam after 13 minutes, Dusan Tadic converting a penalty after Donny van de Beek was brought down in the area. Further goals came in the second half from Larissa Traoré and substitute Klaas-Jan Huntelaar.

The result leaves RKC 10 points adrift of safety at the foot of the table after VVV Venlo beat Heracles 1-0 in the Friday night game. Danny Post scored the only goal after 21 minutes to maintain the Limburgers’ unbeaten start to 2020.

AZ looked way off the pace as they went down tamely 2-0 to FC Twente in Enschede. Giorgi Aburjania’s free-kick and Queensy Menig’s shot gave Twente a first-half lead that AZ rarely threatened after the break.

Coach Arie Slot described it as his team’s ‘worst match of the season’. He said: ‘We have to climb back up and keep going. We can’t let ourselves get talked into a slump.’

Third-placed Feyenoord closed the gap on AZ to four points after twice coming from behind to win 4-3 at PEC Zwolle. PEC were 2-0 up after 10 minutes through a Lennart Thy penalty and Mike van Duinen’s deflected shot, but goals from Leroy Fer and Steven Berghuis either side of half-time levelled the scores.

PEC went ahead on the hour mark when Thy scored his second with a turn and shot, but five minutes later Bergwijn equalised again. Substitute Robert Bozenik, signed from Slovakian side MSK Zilina, decided the match with a looping shot two minutes from time to seal a ninth straight win in all competition for Dick Advocaat’s side.

PSV moved up to fourth with a comfortable 3-0 win at home against second-bottom ADO Den Haag. Sam Lammers opened the scoring from the penalty spot after 17 minutes, before Ryan Thomas and Cody Gakpo added further goals late in the second half.

Fifth-placed Willem II salvaged a point at home to FC Utrecht with an injury-time goal by Paul Gladon, while two goals by Bryan Linssen and an Oussame Tannane penalty helped Vitesse earn a 4-2 win against Heerenveen.

Groningen kept up their hopes of a Europa League play-off slot as they prevailed against Sparta in a gritty duel in Rotterdam. The hosts missed an early chance to go ahead when Sergio Padt saved Mohamed Rayhi’s penalty, and Groningen took full advantage with first-half goals from Joel Asoro and Ramon Lundqvist. Rayhi made amends from the penalty spot in the second half.

Fortuna Sittard and Emmen drew a blank to keep the side from Drenthe two points ahead of their hosts in the battle to avoid the drop.