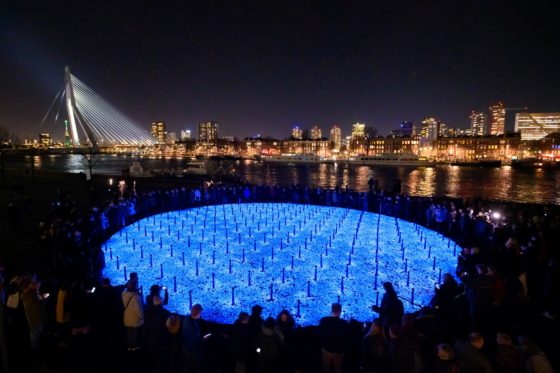 They glow with a piercing, blue light, and then the lights go out. The 104,000 stones that make up a new monument to the Jewish, Roma and Sinti Dutch people murdered in The Holocaust were unveiled in Rotterdam this week.

Levenslicht – which means ‘the light of life’ – was created by artist Daan Roosegaarde for the National Committee of 4 and 5 May, set up to remember World War II and The Netherlands’ liberation on these dates in 1945.

Its aim is to raise awareness of these 104,000 Dutch people who were deported and murdered. The stones will be moved to 170 different local council areas where they once lived, from January 22 to February 2.

But united at first, the 20 metre long monument was presented in a ceremony on Thursday evening, and currently stands on the corner of the Stieltjesstraat and Eva Cohen-Hartogkade in Rotterdam.

Roosegaarde, whose studio impregnated the stones with fluorescent pigment so they would light up under the flickering ultraviolet light, said: ‘This is not a traditional, static monument where people are purely observers. The temporary artwork asks you to particulate: you are part of the story.’

He added that stones are seen as important in Jewish, Roma and Sinti culture.

Gerdi Verbeet, chairman of the national committee said the monument of light reflected a dark time: ‘Seventy-five years of freedom cannot be celebrated without dwelling on the blackest page of WWII: the Holocaust. This unique project lets people in their own neighborhood reflect on the horrors of the past, in a local and personal way.’

The monument is part of a series of events and commissions marking the 75th year after the Netherlands’ liberation.