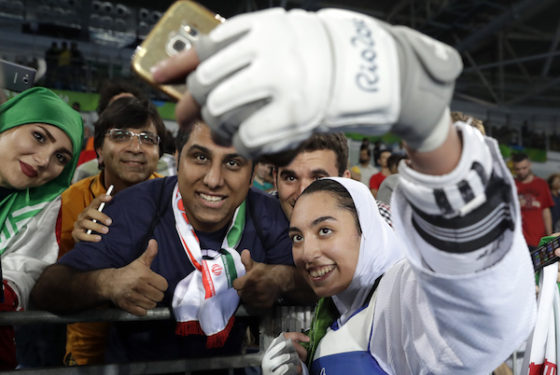 Iran’s only female Olympic medalist has reportedly fled to the Netherlands after placing an open letter on Instagram in which she described herself as ‘one of the millions of oppressed women in Iran’.

Speculation grew that she had fled to the Netherlands after a photograph was shared on social media of her at a memorial at Eindhoven University of Technology to the victims of Ukrainian Airlines flight 752, which was mistakenly shot down over Tehran a week ago.

Eindhoven-based taekwondo trainer Mimoun El Boujjoufi confirmed that she had been living and training in the city for around a month.

‘She was on holiday in Europe, but she and her partner decided not to return to Iran,’ he said. ‘We know her qualities. She is an asset to taekwondo in the Netherlands.’

It is not known if she has made an application for asylum. In 2018, 1,869 people from Iran requested asylum in the Netherlands.

One news agency published a photo showing Alizadeh without a headscarf in a group photograph after a training session. Alizadeh indicated on her Instagram page that she viewed the scarf as a symbol of oppression. ‘I have worn everything that I had to wear,’ she said.