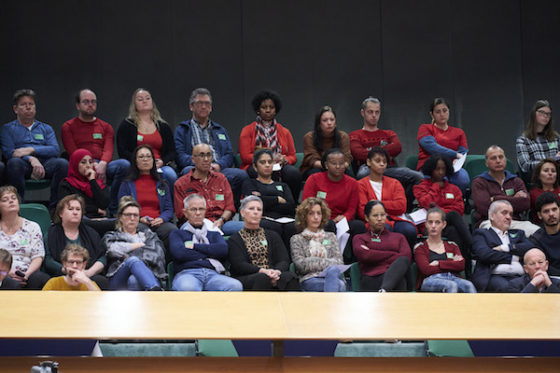 A no-confidence motion against tax minister Menno Snel for his handing of the child benefit tax office scandal failed to generate enough support during a long and stormy debate in parliament on Thursday.

Both GroenLinks and the fundamentalist Protestant party gave their backing to Snel, who is accused of withholding information and failing to deal with the scandal as it unfolded in the media over several months.

Many of the victims of the tax office actions were in the public gallery to watch. Some were crying as Snel pledged to compensate families as quickly as possible, ‘before Christmas if possible’.

A government committee set up to investigate the heavy handed anti-fraud campaign has already said that the tax office should pay compensation to some 300 families who faced financial ruin after being wrongly accused of fraud.

Often it was oversight, miscalculation or an error in processing the paperwork, which led to payments being cancelled.

Most were dual national families, who not only lost benefits but were ordered to pay back money stretching several years. One family faced a €75,000 bill after the tax office said it had wrongly claimed benefits without producing any evidence.

The investigation was started after a daycare centre in Almere and childminding agency in Eindhoven reported their concerns to the Dutch privacy watchdog AP.

The agency had noted that a tax office worker was keeping records about dual national parents, while the daycare centre realised half its parents lost their subsidy, almost all of whom had foreign backgrounds.

Three other investigations into the way the tax office operated are now underway, and Snel has ordered the department to stop clawing benefits from other people suspected of child benefit fraud while these investigations continue.

He has pledged to report back on progress in January.