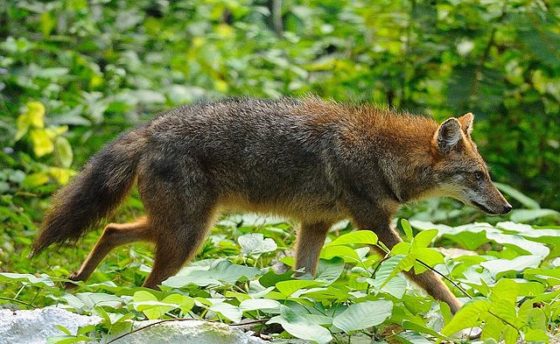 A golden jackal has been spotted in Drenthe, a first for the province, local broadcaster RTV Drenthe reports. The animal was photographed by chance when it walked past a wild life camera in a undisclosed location.

The sighting dates from November 22 but has only now been made public to prevent people from going out and trying to find the notoriously shy animal.

There are only two other reported sightings of the jackal in the Netherlands – in 2016 and 2017 two of the animals were spotted in the Veluwe nature reserve. The camera that caught the jackal in Drenthe was part of a project by the Zoogdierenvereniging Nederland to count mammals such as otters, beavers and pine marten.

‘When I saw the pictures on my camera I was flabbergasted, volunteer Cindy de Jonge-Stegink told the broadcaster. De Jonge-Stegink thought at first she was looking at a wolf but was put right by Forest Commission warden Aaldrik Pot. ‘It was relatively small, with pointy ears and snout’, he said.

Jackals have been making their way to northern Europe from eastern Europe for a number of years now and have been spotted in Germany and Denmark as well. There have been no signs the animals have actually settled there.

The organisation’s wolf expert Glenn Lelieveld said jackals are shy and only need a small habitat of around four square kilometres. ‘It might well be that the jackal has been walking around in Drenthe for quite a long time. But it may have crossed the border by now. They can walk hundreds of kilometres in search of a new area to settle in and their tracks are very difficult to see.’

Jackals are omnivores and it has been suggested that if jackals were to settle here they could help reduce the deer population in a natural way.

Jackals are not a danger to humans. ‘If you leave them alone they will leave you alone,’ Lelieveld told RTV Drenthe.