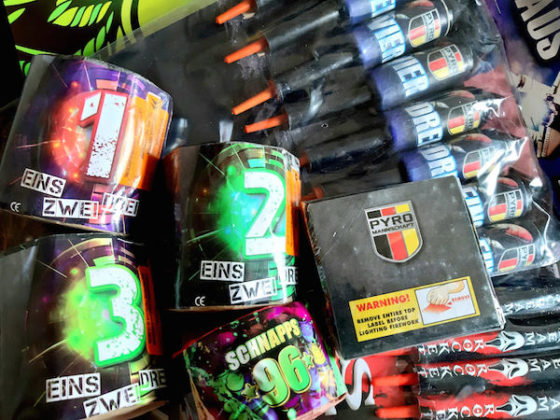 Some people cross to Germany to buy their fireworks. Photo: Odi Busman

Riot police were drafted in to The Hague district of Duindorp on Monday night after gangs of men threw fireworks and stones at police officers patrolling the area.

There has been sporadic trouble in Duindorp since local organisers decided not to go ahead building a giant beach bonfire to celebrate the New Year because of tougher city council rules.

On Monday, six men in their 30s and 40s were arrested in connection with rioting in Duindorp earlier this month, including one man who is alleged to have placed a large firework under a police van, which caused permanent hearing damage to one officer.

Hundreds of kilos of fireworks were taken from their homes during the arrests, police said.

The Telegraaf on Tuesday carried a round-up of pre-New Year related trouble nationwide, including photos of car fires in Utrecht, in Zeeland, in Rijswijk and in The Hague. In Delft and Schiedam, bike parks have been torched while homes in Deventer and Sluiskil in Zeeland have been damaged after fireworks were stuffed through letter boxes, the paper said.

In Andijk in Noord-Holland an elderly man was beaten up by three youths after asking them to stop setting off fireworks. And in Dinteloord in Noord-Brabant a 41-year-old man was arrested for punching a street warden who warned him about setting of fireworks ahead of the official deadline.

Last year an estimated €15m to €20m worth of damage was caused to private homes and cars during the traditional Dutch New Year firework frenzy and 396 people were taken to hospital with injuries. Two people died.

Research by local government magazine Binnenlands Bestuur published earlier this month showed that fireworks are further out of favour in the Netherlands, with 57% now backing bans at a town or city level.

In addition, almost two in five people think the window for setting off fireworks should be further restricted. At the moment, consumers are only allowed to set off fireworks from 6pm on December 31 and 2am on January 1 although this is widely flouted.

The government has refused to ban the sale of all fireworks to consumers, despite growing calls from the police and emergency services, and safety experts, for tough new restrictions.

However, this is the last year that some categories of large fireworks, including giant fire crackers, can be legally sold to members of the public.