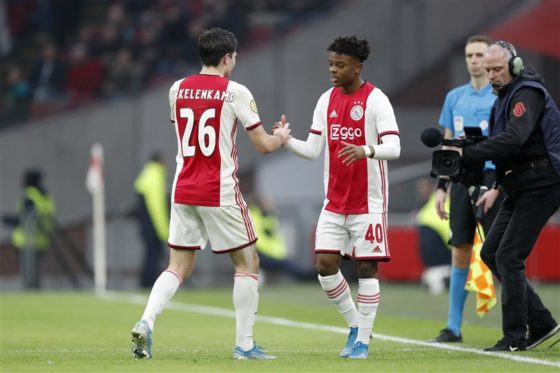 Ajax go into the winter break with a three-point lead in the Eredivisie thanks to an imperious 6-1 win over ADO Den Haag.

On Saturday, AZ Alkmaar missed the opportunity to go top of the league when they lost 3-0 at Sparta. The result owed much to a blunder by goalkeeper Marco Bizot, who was sent off in the fifth minute for bringing down Ragnar Ache outside the penalty area.

‘It’s always disappointing to lose, and it’s extra hard when it happens in the last match before the winter break,’ said AZ coach Arne Slot. ‘Especially when you’ve had such a great first half of the season as we have.’

PSV Eindhoven regained third spot with a 4-1 win over PEC Zwolle, as Brabant rivals Willem II could only manage a 0-0 draw against Fortuna Sittard.

PEC took an early lead through Mustafa Saymak and had chances to increase their lead, but Jorrit Hendrix levelled the scores on 18 minutes before Mohammed Ihattaren put PSV in front with a thunderbolt into the top corner. Bruma and Cody Gakpo added further goals in the second half.

Dick Advocaat’s Feyenoord moved up to fifth at the expense of FC Utrecht with a 2-1 win in the Galgenwaard courtesy of a long-range strike by Orkun Kökcü and a sublime volley from Jens Toornstra.

At the bottom of the table, RKC Waalwijk gave themselves real hope of survival with a 3-0 win over FC Twente that leaves them just two points behind ADO, while Twente have picked up just one point from their last five games.

VVV remain two points further ahead after they lost 3-0 to a resurgent Vitesse Arnhem, who rose to sixth under interim coach Joseph Oosting. The club will need to find a new coach before the competition resumes in January, as Oosting does not have the qualifications to take the job full-time.

Groningen recorded their first victory in four games against northern rivals Emmen, with a brace by Kaj Sierhuis keeping them in contention for a European play-off spot.

Cyriel Dessers’s 12th goal of the season gave Heracles a 54th-minute lead at Heerenveen, but the advantage lasted just two minutes until Joey Veerman scored his first in the Eredivisie to earn the home side a draw.