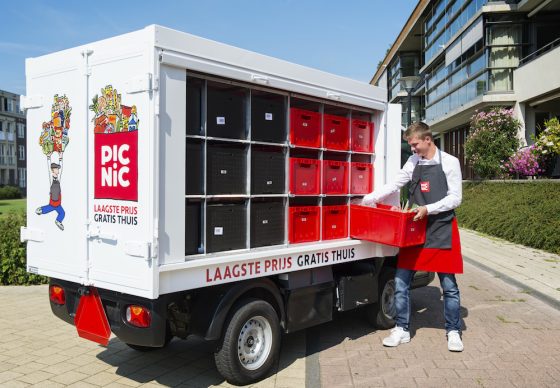 Online supermarket Picnic has raised €250m in funding to develop a new, largely automated distribution centre which it hopes will come on stream within two years.

The 42,000 square metre building will be able to provide 150,000 households a week with groceries and will be ‘the most sustainable infrastructure for home deliveries’ that there is, Picnic’s founders said at a press conference on Wednesday.

The company currently has seven separate distribution centres. The new centre which will employ 1,000 people who fill crates with produce brought to them by automated shuttles.

The €250m capital injection is the biggest ever made to a relatively new company in the Netherlands, beating the €227m raised by payment system Adyen in 2014 and the €243m raised by coding platform GitLab last September.

Of the total, €50m is a loan from ABN Amro bank and the rest comes from four family funds which have already invested heavily in the company.

Picnic was founded in 2015 and currently delivers groceries in 125 cities in the Netherlands and Germany.

The company is also embroiled in a legal battle with the FNV trade union which argues it should pay staff according to the official supermarket pay deal. The FNV says workers are paid €2 a hour less than they should be – a move which has saved Picnic almost €10m.

‘Picnic is refusing to pay workers their dues,’ the union said in a statement. ‘The bill for Picnic’s “free delivery” service is being paid by the workforce. In addition, this is unfair competition toward other supermarkets.’

Picnic, however, says it is a webshop and that its distribution centres are not supermarkets. In addition, classifying the company as a supermarket would have an ‘unjust’ impact on different types of workers, Picnic says.

Judges will rule on the case in the next couple of weeks.