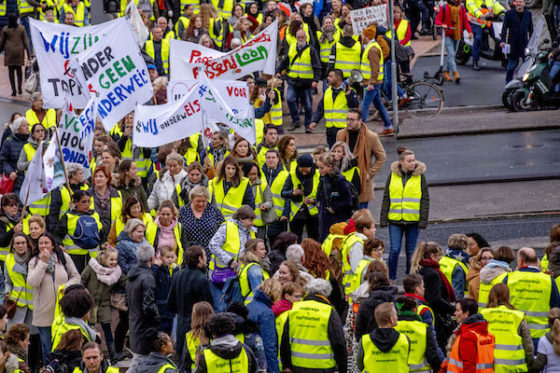 Over 4,000 primary, secondary and special schools are closed on Wednesday as teachers nationwide go on strike in support of more pay and better working conditions.

Teachers are calling for a structural increase in funding to reduce the pressure on teaching staff and increase salaries, as schools report record shortages of teachers.

Some 80% of the country’s schools are involved in the strike, which coincides with a two-day debate on the education ministry budget for 2020.

On Friday the government said it would allocate an extra €460m for schools, but only €363m of that is actually new money. The package also includes bringing forward spending of €97m for reducing the pressure of work in primary schools which was earmarked for the job in 2017.

‘We are being given a very expensive present but it will do nothing to solve the biggest problem facing education: we will not get more pay or more teachers,’ Jan van de Ven, of campaign group PO in Actie told the NRC.

Because most of the money is not structural, schools will use it to buy new computers or sinks for the washrooms, he said. ‘The money will disappear into a black hole and then the minister is going to ask what was done with it.’

Campaign groups argue that only a structural increase in funding will allow schools to permanently increase pay and take on more teachers.

The Aob teaching union said on Friday that four in 10 schools now have no replacement staff should teachers fall ill. The union bases its claims on research involving 6,200 teachers.