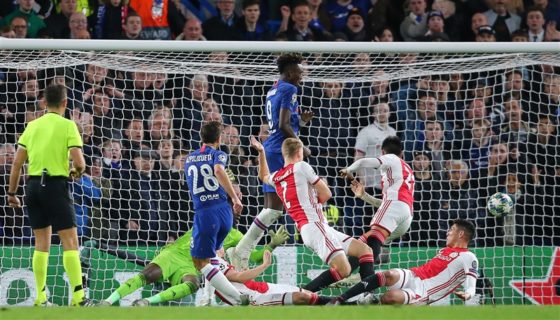 Amsterdam football club Ajax gave away a 1-4 lead to escape with a draw in a bizarre evening’s football in London that saw the Amsterdammers go down to nine men.

Both Daley Blind and Joel Veltman were sent off, leaving Ajax with nine men for the final 20 minutes of play and the score at 3-4 after a penalty. But the Amsterdammers’ hung on in what commentators said was an ‘ an astonishing night of Champions League football.’

The Telegraaf called the game ‘insane’ while the Volkskrant described it as ‘total football madness’ while the English papers praised Chelsea’s come-back.

Chelsea fight back to 4-4 as Ajax pay price for two red cards and two penalties https://t.co/rRUVHBWzMb Match report by @JacobSteinberg

Extremely proud of our players and coaching staff for the way we played the game tonight. A lot of disappointments, but we will fight and play the football which everyone loves and expect from Ajax. ❌❌❌#UCL #cheaja #ForTheFuture pic.twitter.com/dlpXgVfDwa

‘I can’t explain the game. For all the things we might analyse back, the madness of the game, we are here for entertainment I suppose and anyone who watched that has to say what a game of football. Respect to Ajax, what a spectacle,’ Chelsea manager Frank Lampard told the Uefa website after the game.