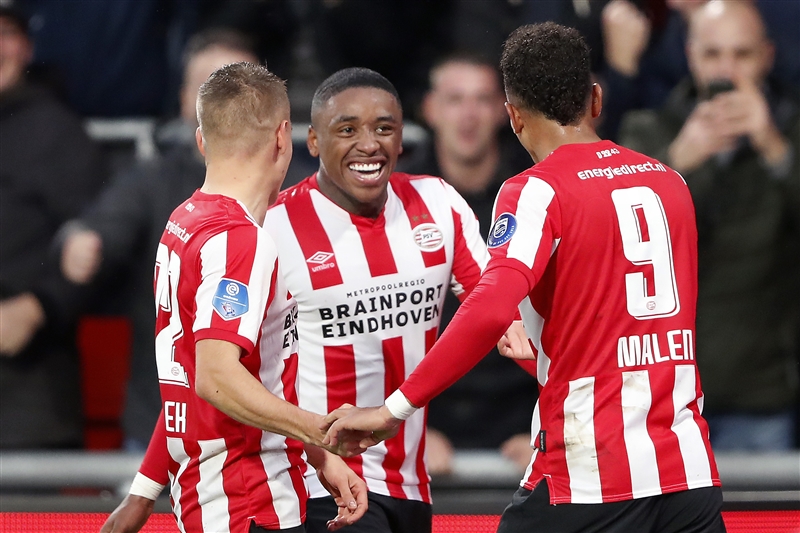 PSV Eindhoven stayed level on points with Ajax at the top of the Eredivisie, but it took them more than an hour to break down a stubborn VVV Venlo.

Mark van Bommel’s side scored three times in 10 minutes, including Donyell Malen’s ninth of the season, before Tobais Pachonik pulled one back with a searing volley. However, Malen had the last word with his second goal on 86 minutes.

Earlier on Sunday Ajax laboured to a 2-0 victory over ADO Den Haag. The Amsterdammers took an early lead through Klaas-Jan Huntelaar but then missed a hatful of chances before David Neres finished off a move that began from an ADO corner on 86 minutes.

‘We created a lot of chances but didn’t score enough,’ said coach Erik ten Hag. ‘We should have had at least a three-goal lead [at half-time].’

The top two opened up a three-point gap over the rest after AZ could only draw 1-1 at Willem II. The Alkmaarders were lucky to come away from Tilburg with a point after Willem II’s Greek striker Vangelis Pavlidis blazed a penalty over the bar five minutes from the end.

Vitesse Arnhem joined AZ on 20 points with their third win in a row against Utrecht, though there was an element of luck about their winning goal as Tim Matavz deflected Max Clark’s mishit shot through the legs of goalkeeper Maarten Paes. The home side also have a fitness concern after Oussama Tannane limped off with a knee injury.

Feyenoord’s stuttering start to the season continued as they went down 4-2 at second-bottom Fortuna Sittard, who took the lead through Amandou Ciss after 99 seconds and were 4-1 up within a minute of the second half thanks to Bassala Sambou’s diving header. The Rotterdammers’ only response was a Steven Berghuis goal after 66 minutes.

Fortuna’s win leaves RKC Waalwijk five points adrift at the foot of the table, with one draw and eight defeats in nine matches. Groningen were the latest team to put the Brabant side to the sword, winning 3-0 with goals from Mike te Wierik, Charlison Benschop and Gabriel Gudmundsson.

Emmen remain in the relegation danger zone, a point ahead of Fortuna and ADO, after a 2-0 defeat at Heracles that means they are still waiting to pick up their first point on the road this season.

Heerenveen edged past PEC Zwolle to notch up their first home win of the season, Mitchell van Bergen scoring the only goal on the stroke of half-time. And Sparta won the battle of the promoted teams as they beat FC Twente 2-1, with Bryan Smeets netting the winner two minutes before full-time.