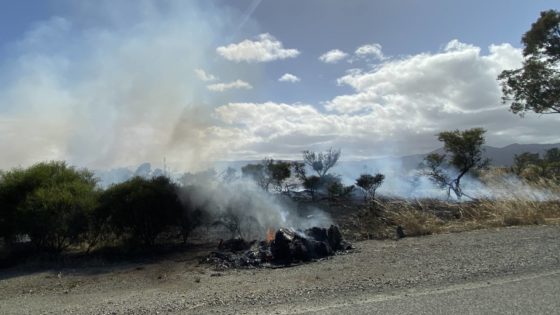 The solar powered car built by Delft university engineers has burned to a heap of ash  just 300 kilometres from the finish of the World Solar Challenge in Australia.

The Delft team were leading the race in the NunaX, when the driver spotted smoke, and was able to escape. ‘We have clear protocols and the safety of the driver is paramount,’ spokeswoman Emie Klein Holkenborg said. ‘That is why we were not able to put out the flames.’

The team is devastated, our solarcar caught fire and we won’t be finishing the @WorldSolarChlg. Currently managing the fires and figuring out what happened.#bwsc19 pic.twitter.com/jIN5dhW9Hv

The cause of the fire has not yet been established and the team say they will study video recordings to try and find out what happened. The car was made entirely of carbon fibre.

It is the first time in 20 years that the Delft team will not have completed the 3,021 kilometre race to Adelaide. They have won seven times, including the previous three.

On Wednesday, the team from Twente University had to pull out after a strong gust of wind blew their car from the road, causing serious damage.

The Twente team was leading the race at the time.

The team is still heartbroken but also incredibly proud of what they achieved! How amazing was RED E’s performance, battling for victory for three days💪

Thanks for all your support and good luck to all the teams still competing! ❤️ pic.twitter.com/BDkEUEGUXc

In total, 53 teams from 24 different countries are taking part, including teams from Eindhoven, Enschede and Groningen.

The Eindhoven team is taking part in the race for cruisers, which involves energy usage and comfort as well as speed.