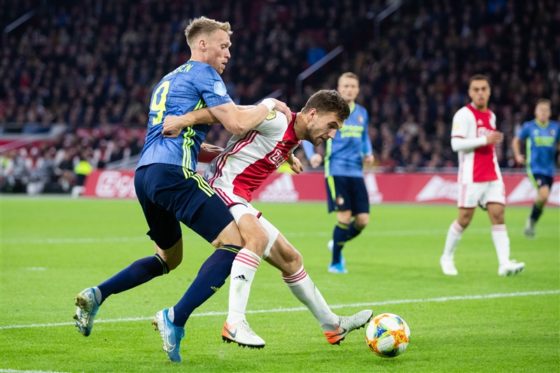 Ajax have opened up a six-point gap at the top of the Eredivisie after an imperious first-half display gave them a comfortable 4-0 win over arch-rivals Feyenoord.

The Amsterdammers were two goals up inside seven minutes as first Hakim Ziyech and then Nicolas Tagliafico found room in the penalty area to poke the ball past Kenneth Vermeer.

‘Our play was excellent today,’ said Ajax coach Erik ten Hag. ‘We upped the tempo at the right time, pressed them very hard and operated as a real team. We didn’t let our opponents get into the game for a minute.’

While Ajax asserted themselves in the Klassieker, PSV Eindhoven surrendered second place as they went down by the same scoreline at home to AZ Alkmaar. Mark van Bommel’s forward line was weakened by injuries to Donyell Malen, Mohamed Ihattaren and Steven Bergwijn, and their task was made harder when New Zealander Ryan Thomas was sent off after 20 minutes of his full debut for a serious foul.

Two quick goals on the stroke of half-time by Myron Boadu gave AZ a deserved lead. Boadu missed three good chances in the second half for his hat-trick before Jonas Svensson and substitute Dani de Wit put the seal on PSV’s first home league defeat in three years.

Vitesse Arnhem could have moved into second place had they kept up their fine recent form at home to struggling ADO Den Haag. After four successive wins VItesse found themselves two goals down within five minutes as 17-year-old Crysencio Summerville’s quick reactions and Lex Immers’s ripping shot were enough to secure ADO’s first win since August.

The weekend’s other 4-0 winners were Heracles Almelo, who outclassed PEC Zwolle in the second half with goals from Silvester van der Water, Mauro Junior and Joey Konings to add to Lennart Czyborra’s first-half strike.

Utrecht overcame Sparta in Rotterdam thanks to two penalties. Frenchman Jean-Christophe Bahebeck scored one and missed one, but goalkeeper Ariel Harush had moved off his line too early to save the second and was unable to stop Adam Maher putting away the retaken kick.

Willem II took an early two-goal lead against bottom side RKC Waalwijk through Freek Heerkens and Pol Llonch. Although Stanley Elbers pulled one back on 20 minutes RKC were unable to claim their second point of the season.

RKC are eight points adrift at the foot of the table after a hat-trick by Mark Diemers gave Fortuna Sittard a 4-1 win over VVV Venlo in the Limburg derby. At the other end of the country, the northern derby between Heerenveen and Groningen ended all square with a penalty for each side.

In Friday night’s game, FC Twente moved back into the top half of the table with their first win since September 15 against Emmen. A brace by Haris Vukcic and Lindon Selahi’s close-range smash put the Enschede side in control at half-time, and although Keziah Veendorp reduced the deficit shortly after the break, the mercurial Aitor Cantalapiedra sewed up the points with a penalty two minutes from time.