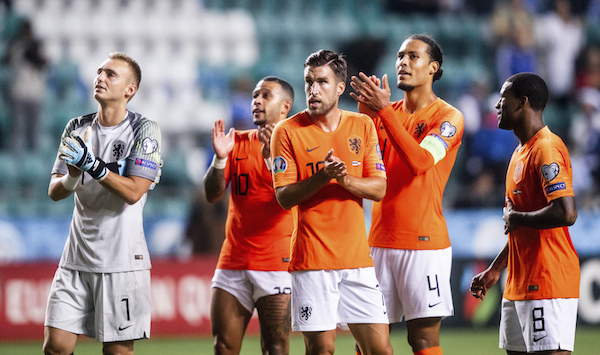 Two strong wins in four days put the Netherlands well on their way to qualifying for next year’s European football championships. Oranje remains in third place in Group C, with nine points from four games but this is one match less than other other four teams.

On Monday night, Oranje booked a routine 0-4 away win over Estonia in a game the Dutch were widely expected to win.

‘Before the match we realised that if we didn’t get the focus right from the beginning it could be a difficult evening,’ Ryan Babel told NOS television.’ It was great to score the first two goals; I’m a player who runs on confidence. I’m no longer one of the younger players in the team, so I try to compensate for the loss of speed by using my experience.’

Uefa reporter Derek Brookman said after the game the Dutch had put in an accomplished second-half performance. ‘Frenkie de Jong ran the show from the middle of the park, Van Dijk and De Ligt were rarely troubled at the back, and Depay managed to conjure up enough magic to make the points safe,’

On Friday the Dutch scored a thrilling 2-4 away win over arch rivals Germany.