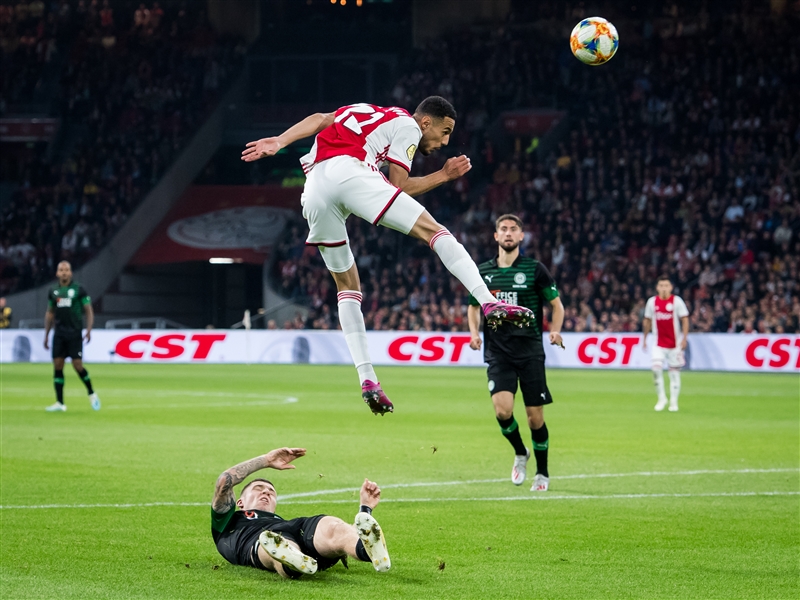 Ajax stayed ahead of PSV on goal difference after grinding out a 2-0 win over Groningen in a match that turned on a hotly disputed sending-off.

The northerners had succeeded in shutting out the champions for 72 minutes when World Cup referee Björn Kuipers brandished a second yellow card to defender Django Warmerdam for taking too long over a throw-in.

In the absence of Warmerdam, who was booked in the first half for a lunging tackle, Groningen held out for only three more minutes until Lisandro Martinez found the net with a long-range shot. Substitute Klaas-Jan Huntelaar doubled the score on 79 minutes.

Kuipers said he had warned Groningen’s players about time-wasting tactics repeatedly during the game and in the half-time break. ‘Groningen started holding up play in the 17th minute and carried on throughout the game. I warned them then,’ he told NOS.

‘When my colleague Sander van Roekel had warned Warmerdam four or five times, I gave him a second yellow card. It’s not very smart to waste time when you’re on a yellow.’

‘I thought it was a joke by Kuipers,’ Groningen trainer Danny Buijs said after the match. ‘Dubious moments like this always favour the top clubs. That was a fact back when I was playing and we saw it again today.’

PSV eased past PEC Zwolle with a 4-0 away win, with Donyell Malen once again among the scorers with a 68th-minute strike. ‘It was a very straightforward win,’ said coach Mark van Bommel.

AZ Alkmaar remain just a point behind the top two after beating Heracles 2-0 through a Teun Koopmeiners penalty and a late strike by substitute Calvin Stengs.

Fourth-placed Vitesse added to RKC Waalwijk’s misery, winning 2-1 despite losing Julian Lelieveld early in the second half when referee Bas Nijhuis decided after studying VAR footage that he had illegally held Stanley Elbers. RKC stay rooted to the bottom with just one point from their first eight matches.

Feyenoord climbed to sixth with their first win in four league outings, leapfrogging FC Twente with a 5-1 win over the Eredivisie newcomers. Steven Berghuis set the ball rolling in the sixth minute when he fired in from Rick Karsdorp’s pass, and although Aitor Cantalapiedra equalised when he pounced on Jens Toornstra’s wayward pass, Jaap Stam’s team proved too strong in the second half.

Fortuna Sittard are still waiting for their first win after they drew 0-0 with Sparta and sit four points adrift of ADO, who went down 3-0 in Emmen in an early season relegation six-pointer.

Utrecht stay fifth after scoring twice in the dying minutes against Willem II, despite playing most of the second half with 10 men after Leon Guwara was sent off for a heavy tackle on Freek Heerskens. Willem Janssen broke the deadlock in the 87th minute before Gyrano Kerk added a second four minutes into added time.

Heerenveen eased to a 3-0 win in Venlo with two goals in the first 15 minutes by their 21-year-old Nigerian striker Chidera Ejuke. Danish striker Jens Odgaard went some way to answering his critics in Friesland with a smart low shot for the third three minutes from time.