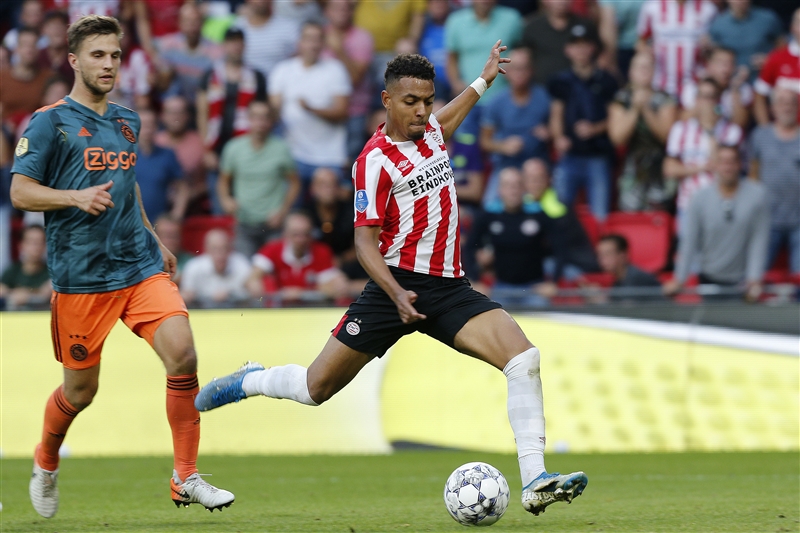 Ajax and PSV remain locked together at the top of the Eredivisie after sharing the points in Eindhoven in a game that only sporadically lived up to expectations.

Quincy Promes put the visitors ahead on 63 minutes, firing in Dusan Tadic’s through ball just as he was about to be replaced by Donny van de Beek. Van de Beek came on instead for David Neres in his first appearance since he suffered a hamstring injury in August.

Both managers declared themselves satisfied with their team’s performance, though Erik ten Hag acknowledged his team missed chances to put the game out of PSV’s reach.

‘I’m happy with the way we played,’ said Ajax coach Ten Hag. ‘We had the game in our grasp, dictated the play and created chances, but ultimately we made a mistake and we paid for it. It was the only really good chance we let them have.’

Opposite number Mark van Bommel was happy with the outcome despite dropping points at home. ‘If you come back from 1-0 down so late in the match, you have to be satisfied,’ he said. ‘Ajax are a good team. If you can get back to 1-1 that’s a good result.’

The big two joined Vitesse Arnhem on 14 points, but can go clear when they play their postponed matches on Wednesday. PSV host Groningen while Ajax are at home to Fortuna Sittard.

Vitesse came from behind to beat Fortuna Sittard 4-2 with two goals in the last 10 minutes from Bryan Linssen, before Matús Bero sealed the result in injury time. It was the third time in the opening six games that Fortuna have scored twice in a match and lost.

Feyenoord salvaged their unbeaten record in the Eredivisie in dramatic fashion when Jens Toornstra shot through a mass of bodies in the 96th minute to secure a draw against Emmen. Dick Lukkien’s team had come back from 2-1 down in the first half to lead 3-2, but had to park the bus after Michaël Heylen was sent off 15 minutes from the end for hauling down Feyenoord’s Naoufal Bannis.

Jaap Stam’s next test as Feyenoord manager is on Thursday at home to AZ, who beat their temporary landlords ADO Den Haag 1-0 thanks to a penalty by captain Teun Koopmainers. A win for the Alkmaar side will take them up to at least third and they could go higher if PSV or Ajax drop points.

Newly promoted Twente Enschede missed the chance to go top of the table on Friday evening as Heracles Almelo won the Twente derby 3-2, with two second-half goals from Mauro Junior after Cyril Dessers had replied to Aitor Cantalapiedra’s opener.

RKC Waalwijk remain rooted to the bottom with a solitary point after they went down 4-0 at Sparta. Groningen were the only team in the lower half of the table to win, climbing four places and leapfrogging PEC Zwolle with goals from Ramon Lundqvist and Ajdin Hrustic.

Willem II’s new Greek signing Vangelis Pavlidis scored the only goal against VVV Venlo, while Heerenveen and Utrecht shared the points in Friesland, Gyrano Kerk putting the visitors ahead on 18 minutes before Chidera Ejuke levelled on the half-hour mark.