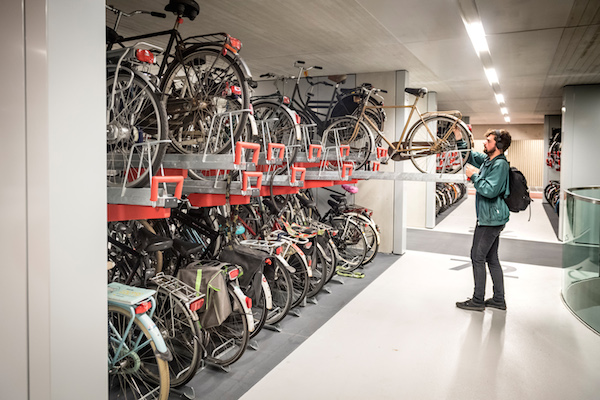 A major extension to Utrecht’s railway station bike park opens on Monday, making it the biggest underground garage for bikes in the world, with space for 12,656 two-wheelers.

The completed bike park, over three floors, beats the previous record of 9,400 bikes held by Tokyo. It includes 480 spaces for cargo bikes and other bikes which don’t fit into regular spaces.

The first 24 hours is free to park, after that the cost is €1.25 per day. Cyclists can follow electronic signs to the nearest empty spaces.

‘The Netherlands is a very mobile country and the bike plus train are a golden combination,’ junior infrastructure minister Stientje van Veldhoven told the AD. ‘Thanks to this park bike you can cycle practically to the platform. The size of this project shows how many people, primarily commuters, are discovering the bike as a weapon against congestion.’

The government’s coalition agreement included a pledge to invest €100m in fast bike lanes and better infrastructure, and this was increased by a further €75m last year.