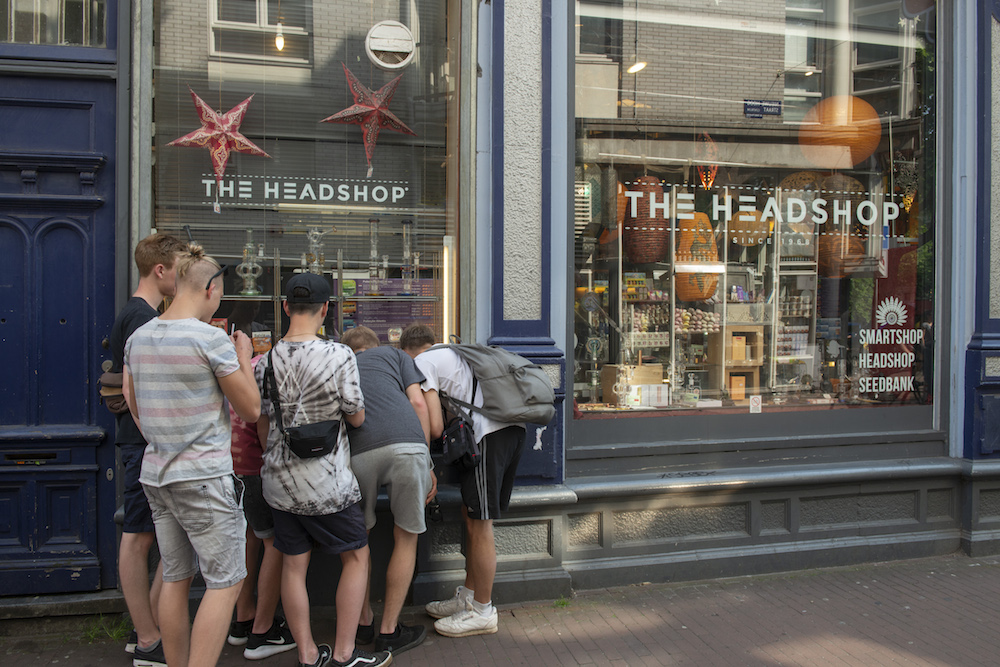 British tourists will be banned from headshops as well. Sabine Joosten/Hollandse Hoogte

British nationals are to be banned from Amsterdam’s notorious cannabis cafes, known as coffeeshops, when Britain leaves the European Union, city officials have confirmed.

Europeans are allowed to buy small quantities of marijuana while visiting the Dutch capital under EU freedom of movement rules. But that is set to change under Brexit, which will guarantee medical marijuana supplies but not drug tourism.

‘When British nationals are no longer European, they will not be able to use coffee shops,’ Bas ‘t Aard, spokesman for the city council told DutchNews.nl. ‘We will roll up a massive cross-media campaign to make them aware of the fact as soon as Brexit happens.’

A spokesman for the city’s coffee shop association said that some cafes may go bust because of the new rules. ‘The Brits accounted for at least 60% of all our customers,’  said Wiett Pot. ‘This will have blowback throughout the weed industry.’

Police are also worried about the impact and fear a lively trade in fake Dutch IDs could develop.

‘We simply don’t have the manpower to police this,’ spokesman Boysen Blaauw said. ‘We are in talks with the mayor about training people who are on social support to do random checks on people in coffee shops.  They are being taught simple English phrases, such as “Show us yer pass” and “You are nicked”. It’s potentially a win-win situation, really.’

Punitive fines for British nationals who buy marijuana on the black market are also likely, Mary Jaine, a senior researcher on drugs policy in the EU, confirmed. ‘Ring-fencing citizens’ rights won’t include smoking weed in Amsterdam,’ Jaine said. ‘And the EU is considering placing portable urinals alongside passport queues so that Brits can be drug tested on entry and exit.’

Legal experts also warned that British tourists have little chance of overturning the ban in the courts. Lawyer Tjerk Meier-Kok said: ‘On the face of it, they would appear to have a prima facie case under Article 2 of Protocol no. 4 to the European Convention on Human Rights which guarantees freedom of movement, but they’ve kind of scunnered themselves on that one, haven’t they?’

News of the impending ban led to mixed reactions on the streets of Amsterdam. Fokker Burggeraaf, a long-term resident of the red light district, was overjoyed. ‘It’s about time the Brits realised that the sun has set on their empire,’ he said. ‘They lounge around the street like bearded sultans in the days of the Raj. If they want to get stoned now, I’ve got plenty of rocks.’

Trudy Recht, a sex worker in a nearby window brothel, added: ‘British tourists should be banned from cycling too, because they always go up the wrong canal.’

However, British tourists told DutchNews.nl they had no idea that Brexit would lead to a coffee shop ban. ‘I’m not sure if I voted remain or leave,’ said Gary, a taxi driver from Liverpool. ‘I was too out of it at the time.’