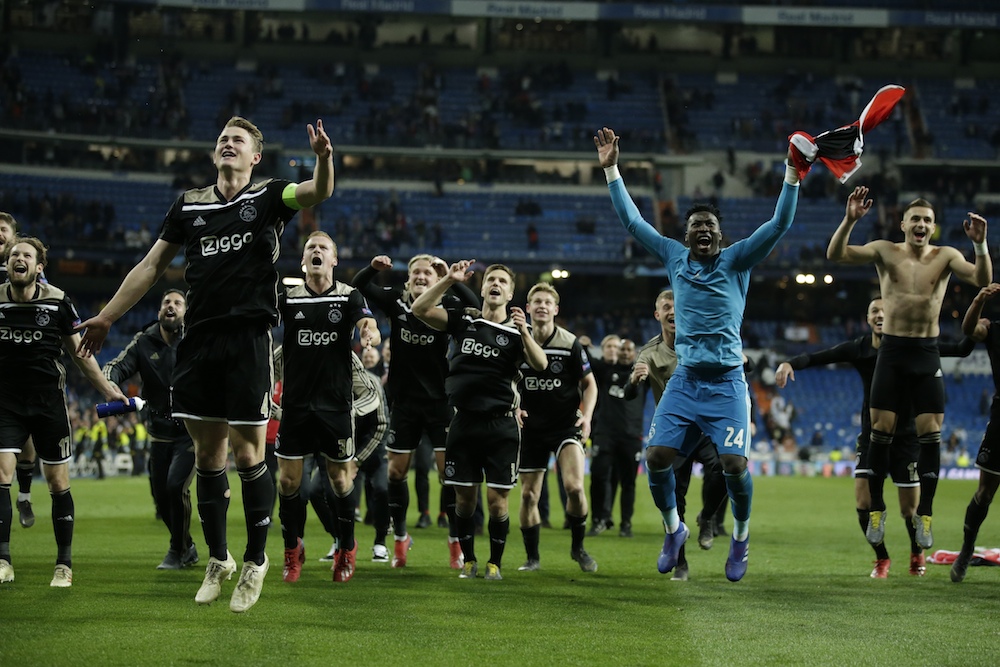 A 1-4 win over defending champions Real Madrid has put Amsterdam football club Ajax in the quarter finals of the Champions League for the first time since 2003.

Ajax lost the first leg at home 1-2 and needed a convincing win to stay in the competition.

Goals from Hakim Ziyech and David Neres put Ajax in a strong position within 18 minutes, with Dušan Tadić – who had assisted both first-half efforts – added a third with 30 minutes left on the clock.

The hosts were given a brief glimpse of hope through Marco Asensio, only for Lasse Schöne to score magnificently from a free kick, wide on the left and seal the win.

The Telegraaf described the victory as the ‘miracle of Madrid’. ‘Everything went wrong for Real this evening,’ the paper said, pointing out the club had also been put out of the Spanish cup and effectively lost hope in the national league title fight in the same week.’

The AD described Ajax’ performance in Madrid as ‘absorbing, extremely good and self confident’. ‘It was as if Ajax was back in time 25 years, a time when Ajax ruled Europe, not Real Madrid,’ the paper said.

“Why couldn’t you beat a richer club? I’ve never seen a bag of money score a goal.” 💰 #CruyffLegacy pic.twitter.com/5KEbKAyg2K

‘It was an evening for the record books,’ Trouw said in its coverage. The Volkskrant said the game had provided a ‘hallucinatingly beautiful evening’. The match, the paper said,’was one of the biggest sensations in the history of the Champions League, and certainly in the history of Ajax.’

The Uefa website described the result as ‘stunning’. ‘Ajax had been unfortunate to lose the first leg and tonight they showed their true value with a courageous and outstanding display,’ correspondent Ben Gladwell wrote.

‘Four years ago Real Madrid conceded four at home to Schalke in the last 16 but progressed regardless. This is a far more painful defeat for the holders, though, who had not lost a UEFA Champions League knockout tie since the 2014/15 semi-finals.’