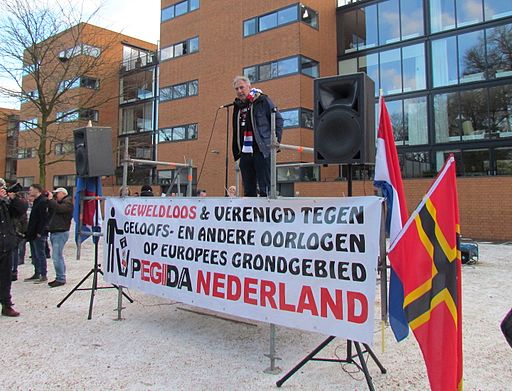 A Pegida demonstration in Amsterdam. Photo: Apdency via Wikimedia Commons

There has been a rise in right wing extremism in Western Europe as a whole but the situation in the Netherlands is not yet as serious as in the early 1990s, the Dutch counter terrorism unit NCTV says in a new report.

In the early 1990s, ethnic minorities, Jews, gay men and women and left-wing groups were targeted by far-right organisations and today, the internet has helped drive that forward and shift the tone of the debate, the NCTV said.

‘The fact that right-wing extremism has adapted to the present day is not a surprise,’ the NCTV said. ‘What is new is that international developments and themes are being adopted more quickly, thanks to the internet and social media.’

However, the organisation said, websites which do not go as far as calling for physical violence have also helped created a climate which encourages hatred of foreigners and which can spur small groups or lone wolves to act, as recent developments in the US have shown.

‘A poisonous online debate can lead to extremist violence,’ the NCTV said. ‘The failed attack on a mosque in Enschede fits in this European picture… and similar incidents, given the current political and social polarisation in the Netherlands, could still take place.’

Last month, the security service AIVD warned that the threat of right-wing extremism is growing in the Netherlands.

The AIVD found an increase in comments encouraging violence against Muslims in particular. Although these are still mainly verbal threats, the service said it is worried about its effect on the political climate.

However, the AIVD was criticised for warning against what it termed ‘intellectual’ right wing extremism and citing the alt-right movement from the United States which, it said, aims to integrate extremist ideas into Dutch society and public administration.