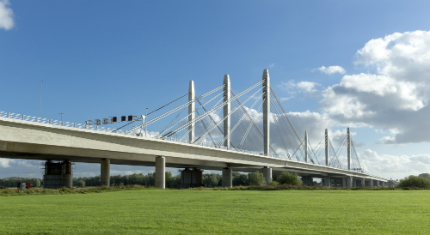 The dramatic collapse of the motorway bridge in Genoa has awakened concern over the state of road bridges in the Netherlands, the Financieele Dagblad said on Thursday.

Transport sector lobby group TLN said it is worried about road bridges maintained by local and provincial authorities but less so about those overseen by national transport authority Rijkswaterstaat,

‘We are reminding those involved of the necessity of building up reserves for the maintenance and renovation of bridges,’ said a TNL spokesman.

Noting the poor maintenance of several high-traffic bridges, Rob Nijsse of Delft University said ‘we cannot rule out a disaster such as that in northern Italy taking place in the Netherlands.’

In the spring, various media reported about serious problems with the maintenance of scores of bridges and viaducts in Noord-Holland province alone. There were 14 instances of ‘an unacceptable risk of collapse’, the FD said.

The infrastructure in the rest of Europe is also a cause for concern for TLN. ‘Key tunnels and bridges on motorways all over Europe were built in the 1960s and 1970s and have reached the limits of their technical lifetime,’ the spokesman said.

In Germany, for example, many bridges on major international routes have been closed to truck traffic on a regular basis.

‘The situation in the Netherlands is a bit better than in the rest of Europe,’ the TNL spokesman said.