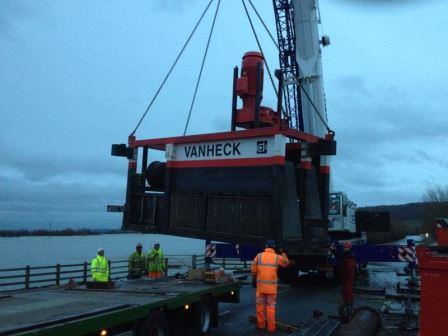 A team of drainage specialists from Friesland has arrived in Thailand to support the efforts to rescue a football team from a network of flooded caves.

The Van Heck pumping company from Noordwolde agreed to send out two members of staff and equipment to help drain the passages in the Tham Luang complex where 12 children and their coach have been trapped since June 23.

Four of the boys were led out of the caves by rescue divers on Sunday, but the operation to retrieve them is being hampered by heavy rain and the difficulty of navigating a four-kilometre route, part of which is underwater.

Edwin Rigthart, who is co-ordinating Van Heck’s efforts from Noordwolde, told the Leeuwarder Courant that his company was standing by for ‘plan B’ if the divers are unable to rescue all the boys.

‘We fervently hope that the divers succeed in rescuing all the children and their supervisors from the caves, in which case we won’t be needed,’ he said.

Van Heck has plenty of experience of deploying large-scale mobile pumps in emergency situations. In 2014 it sent 20 pumps to drain the flooded Somerset Levels in the west of England. Last year it successfully tested a pump in Egypt that can empty an Olympic-size swimming pool in 15 minutes.

Company director Jeroen van Heck arrived in Thailand on Saturday to begin looking at possible solutions to drain the caves. ‘Obviously there are other companies with pumps closer to Thailand, but Jeroen has been asked because he has a lot of expertise in removing water,’ said Rigthart. ‘He is known around the world. It’s not so much about pumping as finding creative and innovative solutions.’

The four boys who escaped the cave on Sunday were said to be the strongest and fittest of the group. They were said to be in ‘good health’ but are being kept in quarantine in hospital because of the risk of contracting infections in the caves.

Most of the group are unable to swim. Their coach, 25-year-old Ekapol Chanthawong, has said he wants to be the last to leave the cave complex because he feels responsible for leading the boys into the caves. He has also lost strength from going without food so that the children had enough to eat.