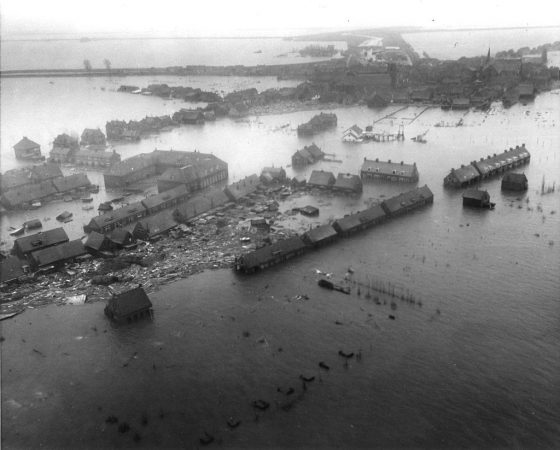 The Netherlands on Thursday remembered the devastating floods of 1953, in which 1,836 people died as sea dykes in the south of the country broke, and large parts of Zeeland, the Zuid-Holland islands and western Brabant were overwhelmed.

Over 70,000 people were evacuated in the disaster, which was caused by a combination of strong winds and high tides. Some 500 buildings were destroyed and many more were damaged. Almost 200,000 hectares of farmland land was devastated by the salt water and 30,000 farm animals drowned.

On Thursday, there was a special ceremony of remembrance at the Watersnoodmusuem in Ouwerkerk, attended by princess Margriet and infrastructure minister Cora van Nieuwenhuizen. Other ceremonies and events took place across the areas worst hit by the floods.

The Dutch newspapers and national television also gave widespread coverage to the tragedy, which led to the development of the Delta Works flood prevention scheme, a massive complex of dykes and sluice gates along much of the southern coastline.

A fascinating reconstruction of the events leading up to the floods by public broastcaster NOS starts the day before when hurricane force winds were raging over Scotland and making their way towards the Dutch coast, funnelling the water through the narrow passage of the southern North Sea at the rate of knots. Already perilously high, a spring tide increased the force of the water even more.

Local authorities in the province of Zeeland and Zuid-Holland, afraid to act because they wanted to avoid a panic, realised at midnight that the situation was becoming critical. There was no a disaster plan, or warning system to alert the people asleep in their beds.

By three in the morning the weaker dykes gave way. Church bells and people running from door to door to knock people up were the only ways to warn the people but for many help came too late.

Local broadcaster Omroep Zeeland estimates there are around 40,000 people alive in the province who were five around the time of the disaster and could tell the tale.  How many of them actually witnessed the event is not clear. There are, of course, many accounts of survivors at the time.

‘It was like we were seeing the end of the world’, one witness said.

‘Then our raft broke and we all fell into the water. I heard our neighbour say goodbye to his family. I felt myself sink in between the bits of wood and other stuff. I thought: we’re all going to drown and in a little while we’ll see each other again in heaven,’ said another.

Many people were buried without being identified, like Nada Verhelst’s aunt Naatje, who was a housekeeper in Nieuwerkerk and about to be married.

Thanks to a large-scale DNA project which was started in 2013 a match was found between Verhelst’s DNA and that of her aunt. Some 80 people have now given DNA samples in the hope of identifying members of their family who perished in the flood.