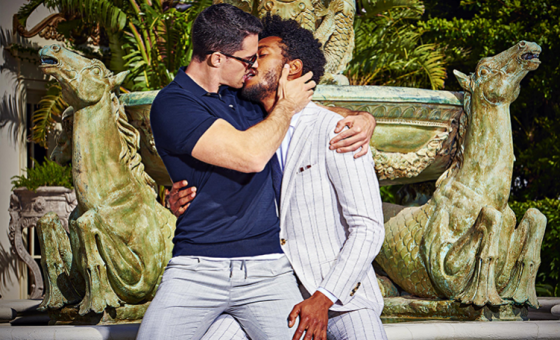 One of the controversial adverts. Photo: Suit Supply

Dutch clothing retailer Suit Supply is no stranger to controversy with its advertising campaigns and the latest, showing two men kissing, has already created a stir, costing the company over 14,000 Instagram followers in just a few hours.

The posters, plastered across the store’s outlets in 22 countries – but not Russia or the UAE – have been praised by gay rights groups, but not all the company’s fans agree.

‘Not everyone has to be gay’ and ‘this is disgusting’ are among the social media comments directed at the company, which has previously caused outrage – and been told off by the advertising standards agency – for posters featuring glossy, half naked women.

‘The fact that we have created a debate makes it relevant,’ founder Fokke de Jong told the NRC. ‘But our sales won’t be going up in the short term, if I look at the reactions.’

Emiel Brinkhuis, editor of gay lifestyle magazine Winq, told the NRC that Suit Supply has a crafty way of getting people to talk about the company. However, the anti-gay reactions show that the world wide emancipation of gay people is not yet complete, he said.

Gay rights campaign group COC said the reactions show gay men are not yet fully accepted in the Netherlands either. ‘Without visibility you do not win acceptance and this campaign is contributing to visibility,’ spokesman Philip Tijsma told the AD.