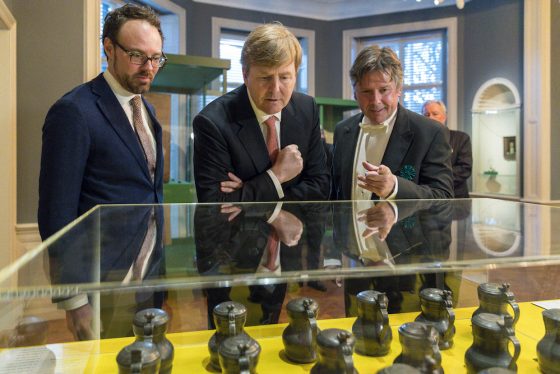 An exclusive Dutch gentlemen’s society – the Illustrious Brotherhood of Our Lady – is celebrating its 700th anniversary and is allowing the outside world a peep into its history for the first time.

Although its membership list is not for public perusal, the society now has a website and a museum and ‘will be more visible at public charity events’, it says.

The brotherhood is also celebrating its 700th anniversary with an exhibition at the Noordbrabants Museum, called Believing in Friendship, which was opened by king Willem-Alexander, who is a member.

On show are some of the objects that make up the rich history of the brotherhood, from the founding act of 1318 to 16th and 17th handwritten choir books, altar pieces, furniture and some Delft Blue brotherhood tableware.

The brotherhood, founded by the catholic clergy of Den Bosch in honour of the virgin Mary, was also known as the Brotherhood of the Swan: the monks were given a swan for their table by members of the aristocracy.

The title of Brother of the Swan still exists although swans are no longer on the menu, but can now only be applied to members of the royal family who, to this day, are members of the brotherhood. The brotherhood remains a strictly male affair, apart from female monarchs.

The society’s mission became, and remains, ‘to care for its age-old material and immaterial cultural heritage, the promotion of Christian solidarity and brotherly ties while taking into account modern-day developments and problems.’

Apart from 36 monks, the members list of 120 includes such influential Dutch families as Fentener van Vlissingen, Van Lanschot and De Roy van Zuydewijn. Painter Jeroen Bosch was also a member, as were Charles V and William of Orange.