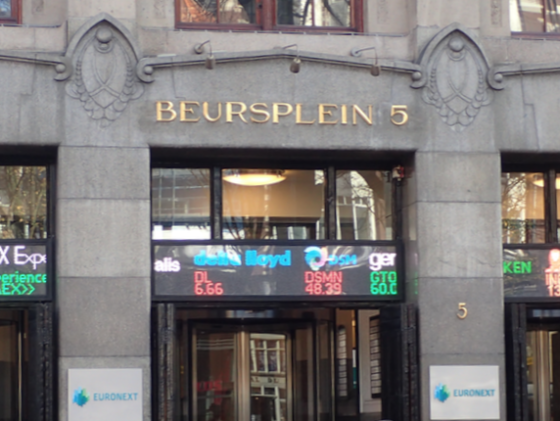 Two companies are planning a flotation on the Amsterdam stock exchange this week, but they are merely the first in a series of companies aiming for an Amsterdam IPO, the Financieele Dagblad reported on Monday.

Commercial bank NIBC and Almere company Alfen, which makes transformer substations, energy storage systems and charging stations for electric vehicles, will both debut on the Amsterdam stock exchange this week.

Six other companies are scheduled to go public in the near future. The largest of these is LeasePlan which leases cars and is expected to have a bourse valuation of €5bn.

The rush for a listing is seen as a sign that the corporate world is not shying away from the bourse after the turbulence seen earlier this month, the FD says. The Amsterdam market has since recovered and, despite the downturn, prices are at a high level.

NIBC, the fifth-largest bank in the Netherlands in terms of assets, is owned by a consortium of international financial institutions organised by US-based private equity house JC Flowers. Flowers first tried to sell the bank in 2008, but its plans were thwarted by the financial crisis.

NIBC announced its bourse flotation after it reported 2017 net profit more than doubled to €213m. NIBC is expected to be worth between €1.5bn and €1.8bn, thus less than its book value of €2bn.

Alfen is one of the fastest-growing companies in the country with annual turnover of €73.4m in 2017, up from €50.5m n 2015. The company reported gross profit of €3m last year. Reuters news agency puts Alfren’s potential bourse valuation in the €500m to €600m range.

Another bourse contender is Dutch Star Companies, an investment vehicle rather than an independent company. It is planning to take a minority (around €55m) stake in as-yet-unidentified Dutch company.