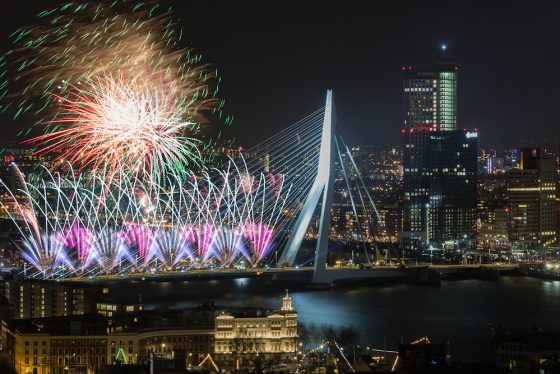 There were few major incidents during the New Year festivities in the Netherlands, with the emergency services reporting a downturn in both fires and injuries. In addition, there were fewer attacks on emergency service workers than in recent years, police said on Monday morning.

In Arnhem, 10 people were taken to hospital after the balcony they were standing on collapsed and they fell three metres to the ground, the Telegraaf reported. And in Amersfoort, a 26-year-old woman was seriously injured after falling out of a window, the paper said.

In the Noord-Holland village of Berkhout a farmhouse with a thatched roof was destroyed by fire. Officials are unsure if the fire was caused by fireworks, the Telegraaf said.

In Amsterdam, where 9,000 people witnessed the official firework show on the IJ, the celebrations passed off peacefully, the Parool reported. Fire engines were called out 165 times and dealt with 19 car and lorry fires. But no underground rubbish containers were set on fire and there were no major incidents, officials said.

In Rotterdam police were busier than in previous years, and the ambulance and fire services were called out 896 times, compared with 561 times last year. However a spokesman said most of the incidents were minor.

In the city’s Spijkenisse district, two men were arrested after police spotted them with a massive firework bomb. A further 200 kilos of illegal fireworks were found at one of their homes.

Doctors at Rotterdam’s specialist eye unit had dealt with 10 injuries by Monday morning but said none of the victims were under the age of 15. Three of the injured were bystanders.

Utrecht was also relatively peaceful with fewer car fires – 17 – than in the previous few years. The fire brigade dealt with 183 reports of fires and reported no aggression against emergency service workers.

Riot police were brought in to break up a fight on an industrial estate in the west of the city where rap groups SFB and Broederliefde were performing, broadcaster NOS said.

There were fewer incidents than usual in the Gouda, Alphen aan den Rijn and Leiden region and no major fires or disturbances, police said. Fire engines were called out 194 times and there were several arrests.

‘The positive trend of the past few years is continuing,’ a spokesman for the regional police force told broadcaster NOS.

In Friesland and Twente officials also report that the festivities were ‘manageable’, with no major fires or other incidents.

In the Brabant village of Veen, often a New Year trouble spot, six cars were set alight but there were no other incidents of note.