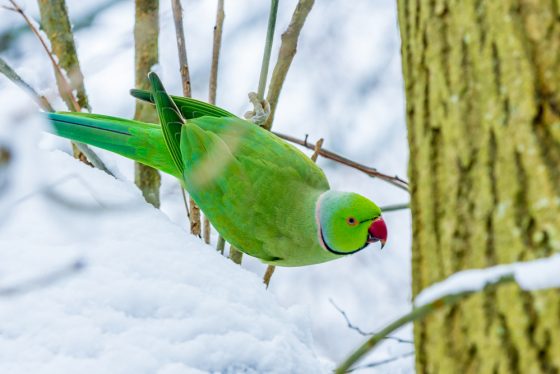 A group campaigning for the eradication of invasive non-native plants and animals in the Netherlands says action should be taken about the ring-necked parakeets which have made their home in many Dutch towns and cities.

The bright green birds have been included on a list of the 100 ‘worst alien species’ by an international group of scientists, which was published in the scientific journal Biological Invasions at the end of last year.

The parakeets are not included on the official European list of invasive species which should be eradicated but, according to the Parool, the Stop Invasieve Exoten now says they should be wiped out as well.

‘The researchers have established which plants, animals and fungi cause the most damage on the basis of 12 factors,’ spokesman Wildred Reinhold said. ‘This includes damage to nature, but also farming, health and welfare.’

The parakeet, the researchers say, competes for nesting space with other birds which live in hollow trees, such as owls.  In addition, they have been known to plunder orchards and eat the fruit and in cities generate complaints about noise.

There are now thought to be some 10,000 of the parakeets in the Netherlands, which established itself in the 1970s.

The Parool said experts looked at how to eliminate the birds in 2015 and said chasing them away from their roosts and chemical sterilisation were an option. However, it would be impossible to eradicate the birds altogether because there are too many of them, the experts said.

Roelant Jonker of the organisation City Parrots, which works on urban parrot conservation, told the paper that the parakeets actually cause very little if any damage.

‘If you really want our nature to be as it used to be, then we have to get rid of rabbits and pheasants as well as the European beech tree, which was introduced by the Romans,’ he said. ‘The one thing about nature is that it is always changing.’