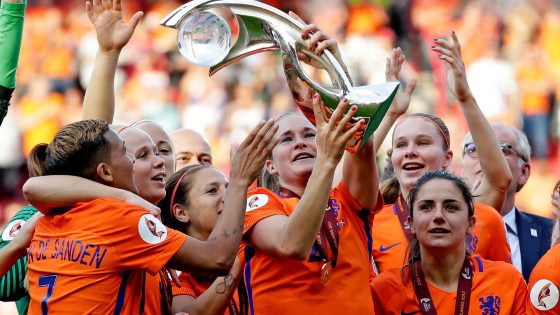 The Dutch football association KNVB has reached a deal with the women’s national football team on more pay, which it says will allow the internationals to focus more on their sport.

The deal runs until the end of the 2019 World Cup. This summer Oranje won the European title.

‘Our players deserve this,’ director Jan Dirk van der Zee said. ‘It is in recognition of the position which the Dutch women are now in.’

‘If they are selected for an international, they will get a bigger stipend and the bonuses for qualification and progression in tournaments has also been increased sharply,’ Van der Zee told website Nu.nl while declining to name amounts.

The team have also become more interesting to sponsors since winning the European title and talks are underway with several companies, the KNVB director confirmed.

‘We’ve also agreed a contract with Talpa to broadcast their games… a few years ago it cost money to organise a women’s international,’ he said.

Last month, top Dutch player Vivianne Miedema called for the KNVB to pay equal fees to players who are called up for the men’s and women’s national teams.

The Arsenal striker pointed out that the women’s team won the European championships last summer whereas the men have failed to qualify for the last two international tournaments, yet are still paid more.

Miedema said in a reaction to Tuesday’s news: ‘They were tough discussions at times but we are very happy with what has been agreed. We are going to do our absolute best to make 2018 a successful year and qualify for the 2019 World Cup.’