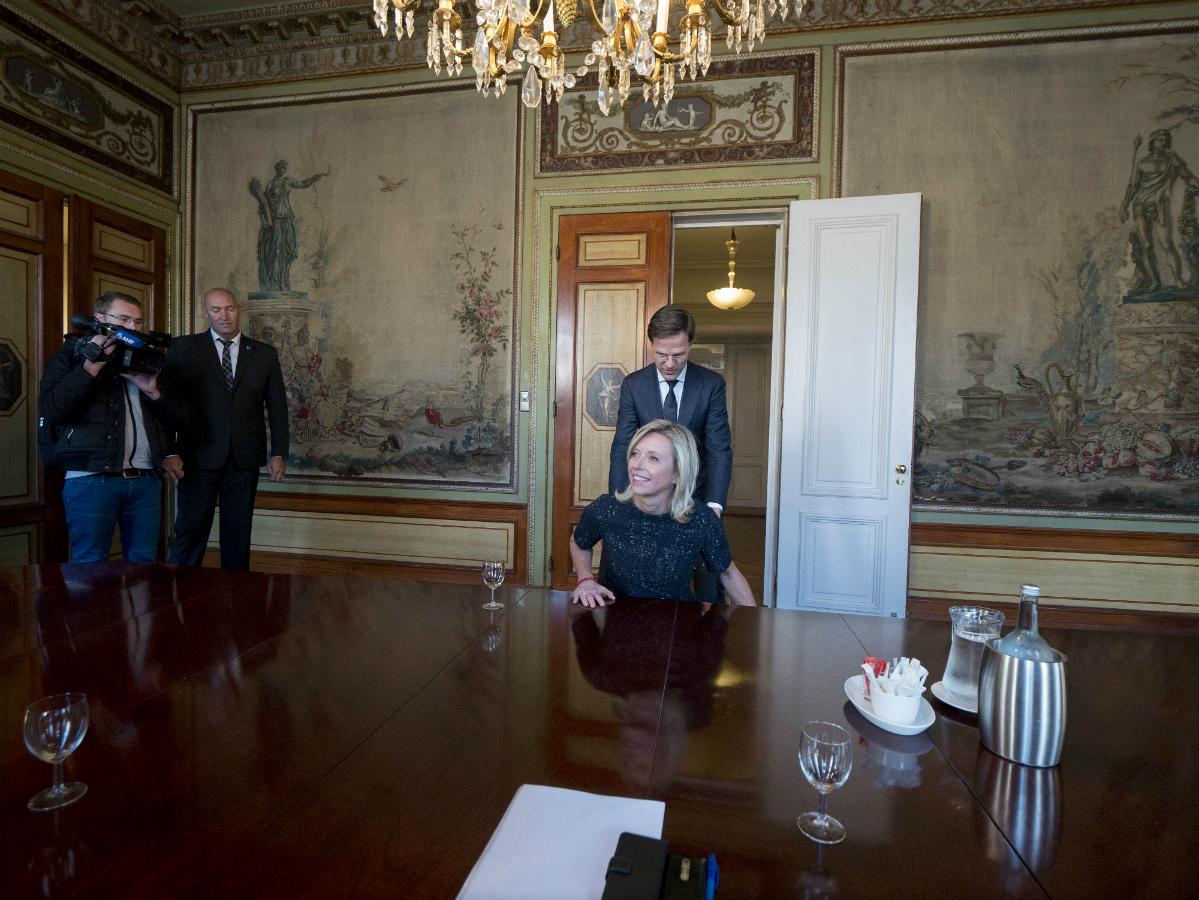 Given that Mark Rutte’s new cabinet is the first Dutch government in 40 years to draw its members from four different parties, its line-up is strikingly homogenous.

The team of 24 ministers and junior ministers (staatssecretarissen) comprises 14 men and 10 women. This compares unfavourably with the governments of Justin Trudeau in Canada and Emmanuel Macron in France, where 50% of ministers are female, and even Rutte’s previous coalition with the Labour Party (PvdA), where women held 46% of cabinet seats.

The UN Women’s committee for the Netherlands launched a petition calling for Rutte to appoint a balanced cabinet, which attracted 1,000 signatures. Rutte acknowledged last Thursday that there was a lack of female ministers, but argued: ‘I would have liked to have more, but what counts in the end is that we have the best people.’

Rutte’s cause was hindered by the resignation of Jeanine Hennis, a fellow VVD party member and a woman with a strong track record as defence minister, in the final days of the last government, which ruled her out of an immediate return to cabinet. Hennis is succeeded at defence by another woman, the CDA’s Ank van Bijlleveld, and deputy minister Barbara Visser of the VVD.

The number of women returned to Parliament has also fallen at each of the last two elections from a high point of 64 (out of 150 MPs) in 2010 to 54 currently – the lowest proportion since 2002.

Even more striking is the lack of ethnic diversity in the cabinet. None of the 24 ministers has a non-European background and just one, Croatian-born Visser, originates from outside the Netherlands. Interior minister Kajsa Ollongren is the only dual national, with Dutch and Swedish passports as well as roots in the Finnish aristocracy.

D66 minister Ollongren is also the first openly gay politician to be appointed deputy prime minister. Each of the three junior coalition parties has named a deputy to Rutte, who stands in for the prime minister when he is away on foreign business or otherwise engaged. The others are Carola Schouten (Christian Union minister for agriculture) and Hugo de Jonge (Christian Democrat health minister).

The cabinet also has a narrower age span than its predecessor, with 40-year-old Schouten the youngest member while Ferdinand Grapperhaus (CDA justice minister) is the most senior at 57.

The inclusion of four parties in the coalition has forced Rutte to abandon his small-government principles and appoint a larger team than before. His own VVD party, as the largest in the coalition, has six ministers and three deputies, the CDA and D66 each hold four senior and two junior posts, and the Christian Union two and one.

Some new ministries have been created, such as agriculture, while other cabinet seats have been added by creating ‘dual ministries’. Grapperhaus teams up in the justice department with former deputy education minister Sander Dekker of the VVD; education is represented by Ingrid van Engelshoven and the experienced Christian Union politician Arie Slob; and De Jonge shares the health portfolio with the VVD’s Bruno Bruins.

Several newspapers also point out that the cabinet has a strong Rotterdam accent, with 10 of the 24 members having a connection with the port city. Overall 11 are based in South Holland province and another 6 in North Holland, though a look at their birthplaces shows that every province is represented apart from Flevoland and Drenthe.

Finance
Wopke Hoekstra (CDA, minister). A partner with McKinsey and a senator since 2011, he is credited with writing the CDA’s most recent election manifesto.

Social affairs and employment
Wouter Koolmees (D66, minister) A civil servant in the finance ministry before being elected as an MP in 2010. Had a key role in the coalition negotiations.

Economic affairs and climate
Eric Wiebes (VVD, minister). Struggled with reorganizing the tax office in Rutte’s second government but rewarded for his doggedness with new post.

Mona Keijzer (CDA, junior minister). Active in local politics for years, she was elected to parliament in 2012 after challenging Buma for the leadership. Was party spokesman on care and culture.

Agriculture (new ministry)
Carola Schouten (ChristenUnie, deputy prime minister and minister) Was a parliamentary party worker to 2011 when she became an MP. Famed for her knowledge of finance.

Justice and security (was security and justice)
Sander Dekker (VVD, minister for legal protection). Junior education minister since 2013. Prior to that was an alderman (education and finance) on Rotterdam city council.

Ferdinand Grapperhaus (CDA, minister for justice and security). Grapperhuis is a professor of European labour law at Maastricht University and has been a member of the SER advisory body since 2006.

Mark Harbers (VVD, junior minister for immigration). An MP since 2009. Prior to that, an alderman on Rotterdam city council.

Defence
Ank Bijleveld (CDA, minister). An MP in 1989, Bijleveld was junior minister for home affairs in Balkenende’s fourth cabinet and has been king’s commissioner in Overijssel since 2011.

Barbara Visser (VVD, junior minister). Worked for the finance ministry from 2006 to 20010, then elected to Zaandam council. An MP since 2012.

Education, culture and science
Arie Slob (ChristenUnie, minister for school education and media). A teacher in Zwolle by profession, Slob was elected to parliament in 2001 and left in 2016. He is now director of Overijssel’s history centre.

Health, welfare and sport
Hugo de Jonge (CDA, deputy prime minister and minister for care of the elderly) A primary school teacher by profession, De Jonge has been an alderman in Rotterdam (education, youth, care) since 2010.

Bruno Bruins (VVD, minister) was junior minister for education in Jan Pieter Balkenende’s third cabinet up to 2007. He is currently chair of the management board at state jobs agency UWV.

Paul Blokhuis (ChristenUnie, junior minister). Active within the CU for years and a provincial councilor from 2003 to 2006. Now alderman with responsibility for healthcare in Apeldoorn.

Home and kingdom affairs
Kajsa Ollongren (D66, deputy prime minister and minister) Mark Rutte’s secretary general at the General Affairs ministry until 2014 when she became alderman for economic affairs and culture in Amsterdam

Foreign affairs
Halbe Zijlstra (VVD, minister). An MP since 2006, Zijlstra was junior minister for education and culture in Rutte’s first cabinet. Known as a hardliner, he has called for a ‘realistic foreign policy’.

Sigrid Kaag (D66, minister for foreign trade and development). Kaag, a former civil servant, has worked for the United Nations for years and has been the UN’s representative in Lebanon since 2014.

Infrastucture and environment
Cora van Nieuwenhuizen (VVD, minister). Elected an MP in 2010, she focused on integration and asylum issues. Described as an all-rounder, Nieuwenhuizen has been an MEP since 2014

Stientje van Veldhoven (D66, junior minister). An MP since 2010, Van Veldhoven was previously a civil servant and a diplomat in Brussels.