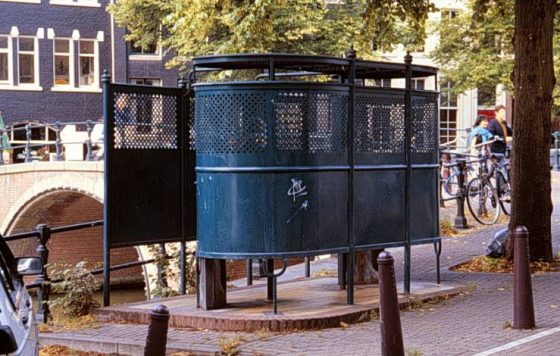 A ‘curl’ urinal in Amsterdam. Photo: BMA via Wikimedia Commons

A protest in Amsterdam about the lack of female public toilet facilities, prompted by a judge telling a woman she should have used a men’s urinal, has been cancelled – because too many women want to take part.

Cathelijne Hornstra put out a call on Facebook for women to come to Leidseplein in the city centre and use the urinal to show how bizarre the judge’s comments are. So far, 1,100 women said they would attend the protest and and another 7,900 said they are interested in attending.

‘The overwhelming interest means we have grown too big,’ Hornstra said. ‘We can’t fit all the women who said they would come on that one spot.’ Now women are being urged to carry out mini protests at urinals throughout the city and upload photos to Facebook and Instagram with the hashtag #wildplassen.

On Monday a judge in Amsterdam told a woman he fined €90 for peeing in public that she could have used a men’s urinal. ‘It would not be pleasant but it can be done,’ the male judge said.