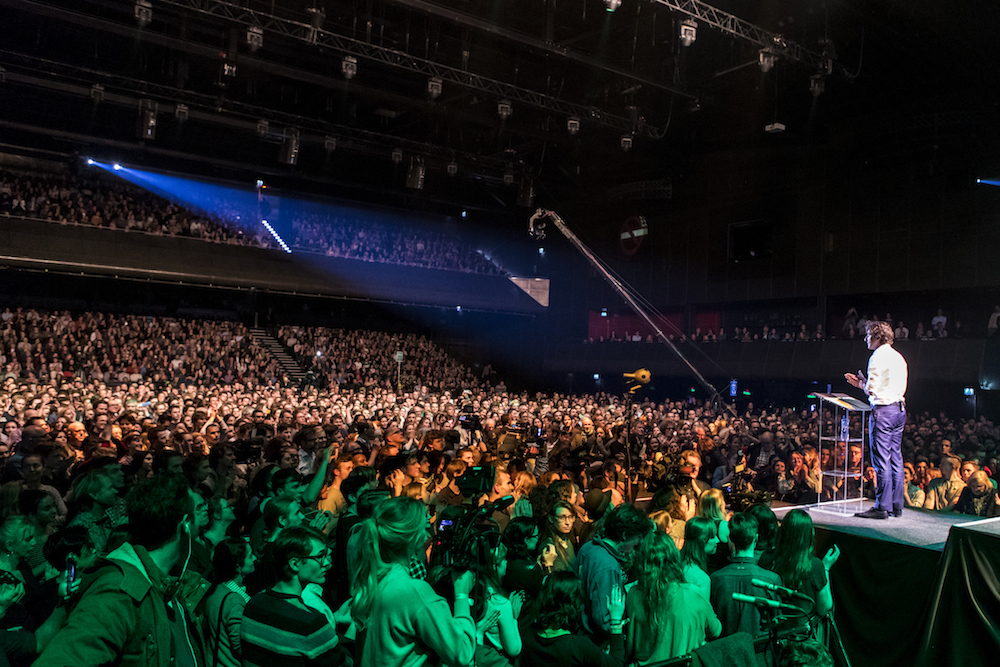 Jesse Klaver, the buoyant young leader of the GroenLinks green-left party, called for radical change in politics at a rally of 5,000 people in Amsterdam on Thursday night.

Klaver, who was rated winner of an RTL debate involving eight political leaders by viewers on Sunday, attracted a mass crowd plus international press to his party’s last MeetUp event at the AFAS Live venue.

Although GroenLinks is rated fifth in the last poll of polls, it has quadrupled its support from 2012 and opinion formers such as pollster Maurice de Hond tip Klaver as a possible prime ministerial contender if his party could build a coalition of centre-left parties after elections next week.

To sighs from the crowd of ‘mooi’ (beautiful) and shouts of ‘juist’ (right), Klaver took to the stage to give a half-hour rallying cry to thousands of potential supporters holding beer and arms aloft.

‘There has been lots written and said about our campaign,’ he told the audience, after performances from singers, rappers and a storyteller. ‘It’s regularly about my tie – straight or not, knotted or not – my age, and precisely how high my shirt sleeves are rolled. But that, I think, isn’t the heart of our campaign…

He added: ‘There’s a growing movement that has had enough of hate, fear and selfishness. Right-wing parties talk about Sinterklaas, Christmas trees, Islam, building walls and shutting borders and ‘behaving normally’. But we don’t hear them talk about inequality, the uncertainty of people on short-term contracts and climate change.’

Referring to Mark Rutte’s VVD recent advert calling for people – generally understood to be immigrants – to respect Dutch values and ‘be normal or be gone’, he said: ‘Do you know what is not normal, Mark? Keeping coal-fired power stations open when we know how polluting they are.

‘Or that in one of the most medically-skilled countries in the world, people daren’t go to a doctor because they can’t pay their bill. And it’s not normal that education becomes a factory where teachers aren’t the boss, but tests are: this, Mark, isn’t normal.’

All tickets were taken days in advance for the free event – the biggest political rally in recent political history – and voters told DutchNews.nl they were open to GroenLinks’ message of cleaner energy, pollution taxes and greater equality.

Tom Samuels, 25, a store department manager who is half-Indonesian, brought his brother and a friend to listen. ‘I’m a swing voter,’ he said. ‘I don’t know if I will support GroenLinks but I heard about the MeetUps from a friend. We are all going to vote.’

Romy Weijler, 29, a freelance hospitality worker from Amsterdam, said: ‘I’m a GroenLinks voter. I’m for a better environment and Jesse Klaver is great. I think it’s better that he’s younger – he’s a year older than me, and I trust my generation.’

After the event, Klaver talked to a scrum of international television, radio and newspaper outlets – stressing that although he may look a little like Canadian prime minister Justin Trudeau, his campaign movement was more modelled on Obama’s, and he’s his own man.

He told DutchNews.nl that he saw GroenLinks’ positive message of equality and green living as an antidote to populists like Geert Wilders, recently given a criminal conviction for insulting and inciting racial discrimination against Moroccans.

‘Mostly it doesn’t get in my head, although sometimes it does,’ said Klaver, who is half-Moroccan. ‘The only thing I think is that we must ensure he does not win the elections. We are telling a positive story about what The Netherlands is. He and right-wing parties focus on festivities like St Nicholas – I focus on the values that are important to the Netherlands: freedom, tolerance, empathy. I want to say to all the populists: I want my Netherlands back.’

Dutch general elections take place on March 15th, and polls have shown a splintering of support across the 28 parties taking part, strong showing for the far-right PVV led by Geert Wilders, and massive drop in support for PvdA Labour, currently in government but now polling seventh.

Although Mark Rutte’s VVD Liberal party is just leading, with 24-28 seats predicted, and the PVV second, the Volkskrant predicts ‘a coalition of four or five parties is pretty much a fait accompli’.

Klaver might – he reveals – have a fear of heights, but this doesn’t stop him aiming to be the Netherlands’ next prime minister.