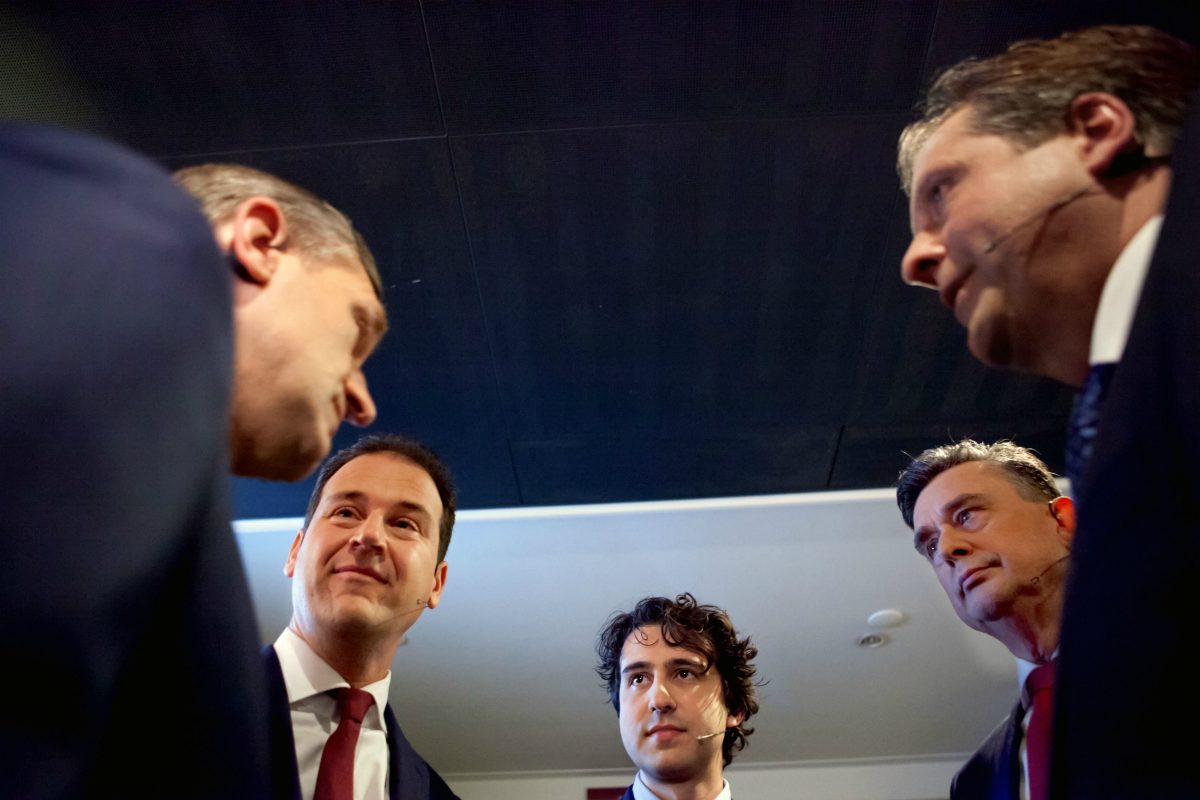 The first television debate of the election campaign concluded without an outright winner as none of the five leaders on show landed a decisive blow in more than two hours of rigorous debate.

In the absence of the front-runners in the opinion polls, Mark Rutte and Geert Wilders, the middle-order parties had the chance to make up ground. Wilders and Rutte pulled out in protest when broadcaster RTL increased the number of participants from four to five.

The debate covered most of the major themes of the campaign, from the cost of healthcare to refugees and Islam to the issue of whether car drivers should be taxed by the kilometre. D66 leader Alexander Pechtold was named in a viewers’ poll as the winner of the contest, with GreenLeft leader Jesse Klaver a close second.

The absence of Wilders gave the debate a more sober tone, particularly on the question of whether Islam posed a threat to Dutch identity. Pechtold used the issue to go on the offensive against Christian Democrat leader Sybrand Buma, accusing him of pursuing policies that would turn Muslims into ‘second-class citizens’. Buma retorted that Pechtold was out of touch with ordinary people’s concerns: ‘The Netherlands is angrier, more anxious and more insecure than ever,’ he said.

Labour (PvdA) leader Lodewijk Asscher signalled a departure from his party’s recent position on refugees. ‘A society can only take so much,’ he said, referring to the troubled reaction to the swell of asylum seekers from Syria in 2015. In contrast, his two rivals on the left, Jesse Klaver of the GreenLeft group and Socialist Emile Roemer, argued that efforts should focus on ending the conflict in the Middle East.

The debate was expected to feature a tussle between the three leaders on the left, but Klaver and Roemer largely avoided a direct confrontation with Asscher. Each leader was allowed to call out one of their rivals for a head-to-head mini-debate: Roemer used his to press Klaver on a point from Friday’s Radio 1 debate, when the GreenLeft leader challenged Asscher to form a cabinet without Rutte. Klaver seemed to backtrack, insisting he was ruling out nobody as coalition partner – except Wilders.

Klaver, the least experienced of the leaders, looked flustered early on but grew stronger in the second half of the debate, when he moved on to stronger ground such as motorway charging. Traffic jams could be cut by 60% by charging drivers 15 cents a kilometre in rush hour and three cents at other times, the GreenLeft leader argued, improving both energy consumption and productivity.

Asscher’s most difficult moment came at the beginning, when Buma attacked Labour’s policy of scrapping the excess charge (eigen risico) on healthcare because it deterred people from seeking medical treatment. Asscher was part of the cabinet that had raised the contribution significantly, Buma pointed out: ‘If you really believe that, then you’re responsible for the people who’ve been avoiding treatment for the last four and a half years.’

Klaver challenged Pechtold on the same issue, arguing that high upfront costs were making healthcare inaccessible for those who need it most, but the D66 leader accused Klaver of wanting to introduce a raft of new taxes to pay for his plan. Pechtold claimed 70% of people were against abolishing the excess charge: ‘healthcare isn’t free,’ he said.

Roemer, the champion of the National Healthcare Fund, tried to take the initiative on health and jobs, arguing that a million households were being priced out of medical treatment, but was called out by the fact-checkers for his claim that the cabinet had ‘destroyed 365,000 jobs.’ Asscher pointed out that unemployment was falling and acknowledged that changing working patterns were creating uncertainty, but did not go beyond a vague pledge that he would work to ‘make fixed contracts the standard once again’.