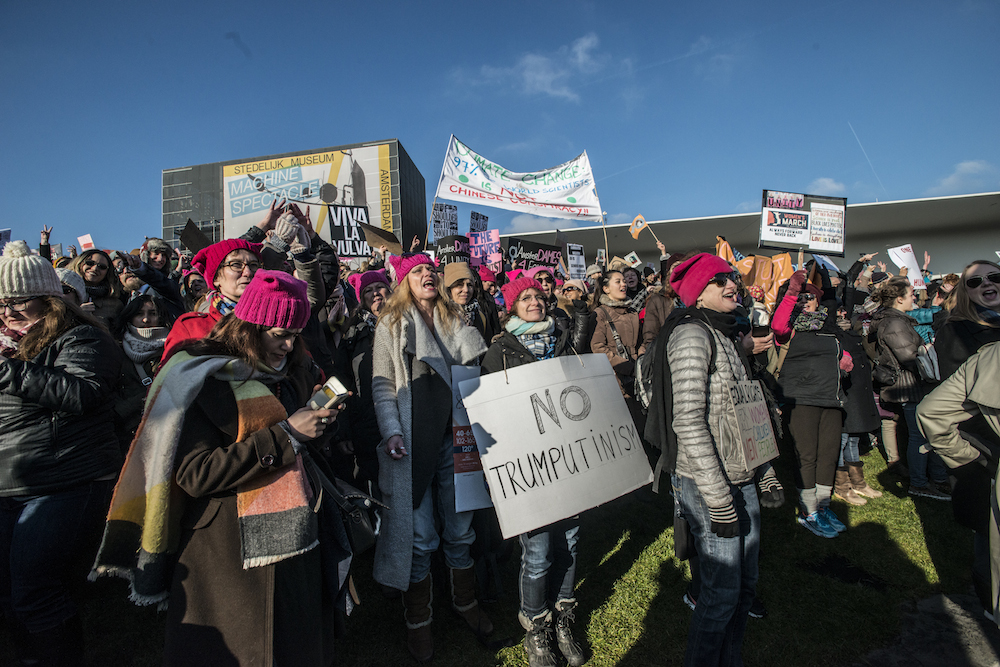 At least 3,000 women, including many Americans, gathered on the Museumplein in Amsterdam for Saturday’s anti-Trump demonstration, broadcaster NOS said. Around one thousand women held a similar protest in The Hague.

‘Women’s Marches’ were held in over 600 cities worldwide calling for equal rights for women and to protest at US president Donald Trump’s derogatory comments.

Kate Imbach, who comes from Boston and lives in Amsterdam, told the Volkskrant: ‘Today is about more than women’s rights, it is a about human rights.’

Amanda Sorensen, who comes from California and also lives in Amsterdam said: ‘My hope is that Trump achieves nothing in the next four years. People who voted for him were lied too.’

Monnickendam resident Sally Robinson, 67, told the paper: You have to do something… our message is respect, peace and compassion. Climate change is important. Trump thinks it is nonsense. He has no compassion with refugees and migrants. It is shocking how arrogantly he plays people off against each other.’

Cathy Alexander (60) from Amstelveen, carrying a placard which said ‘a woman’s place is in the resistance,’ told the Parool she came from Ohio. ‘I’m so disappointed Trump won,’ she said. ‘Sixteen years ago, my husband and I came to the Netherlands when [George] Bush came to power. Back then we said ‘we’re in exile’.

A solid sign in Amsterdam at the #WomensMarch pic.twitter.com/xZa47KSGe7

#WomensMarch in Amsterdam today 🌹
This is so beautiful, we are strong together pic.twitter.com/VPUji9COks

Proud to have marched in #thehague with so many people across the globe for humanity & human rights #WomensMarch #ChooseHumanity pic.twitter.com/FQlxv1ZxJi