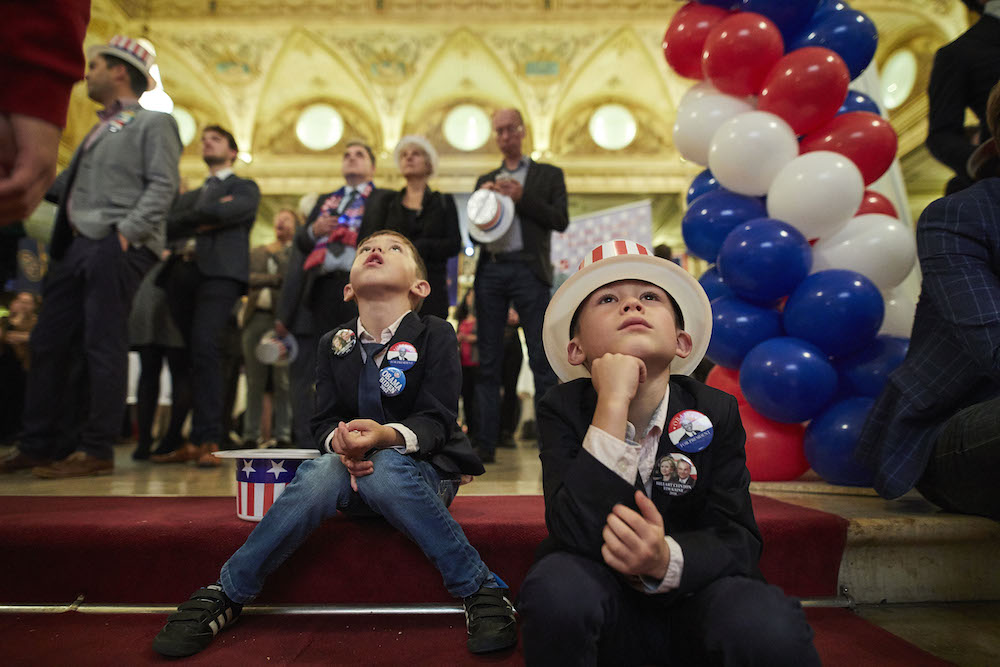 Voters of the future at the Who’s the President event in Scheveningen. Photo: Phil Nijhuis

While Dutch politicians and commentators reacted cautiously to Donald Trump’s win in the US presidential race, many of them saw parallels to the situation in the Netherlands, where voters are deserting traditional parties and putting their faith in populist candidates.

Geert Wilders, leader of the anti-immigration PVV, spend 90 minutes on Wednesday explaining to the national and international press how Trump’s ‘revolution’ means that ‘politics will never be the same again’.

‘What happened in the US, can happen here,’ Wilders, who attended the Republican party convention earlier this year, said. At the March general election, Dutch voters too will ‘take back their country’.

Socialist Party leader Emile Roemer also thinks Dutch anti-establishment parties will benefit from Trump’s win. ‘The ruling elites will be punished even more. Trump has shown this is possible,’ he says in the NRC.

Roemer considers the SP to be one of the challengers to the present order. ‘People want to take back power. We have to make sure this happens,’ he told the paper.

Nevertheless, Alexander Pechtold, leader of the D66 Liberal democrats, points out that the Dutch political system, based on party lists and proportional voting, makes it virtually impossible to win an absolute majority in the 150 seat parliament.

Syp Wynia, writing in Elsevier, says there are 10 lessons for Dutch politicians to pick up from Trump’s win. For a start, he points out, the polls tend to under-estimate the support of ‘populist’ politicians. And calling a party leader a ‘fascist’, he says, is no longer a vote winner.

In particular, he warns: ‘People who vote for Geert Wilders are quickly labelled PVV supporters. But a PVV voter does not have to be a supporter. There is a real chance that the PVV voter picks the party to show his rejection of the elite other parties.’

Indeed, the established party leaders all see Trump’s election as a wake-up call. ‘We have enough time [before the March vote] to formulate the answers,’ Christian Democrat leader Sybrand Buma said.

But is Wilders a potential prime minister? He likes to think so, and is keen to portray himself as a hot candidate to the foreign press. But, Buma points out, the PVV’s support has been crumbling since the beginning of the year – it is now around 18% – and almost every party and parliament has ruled out forming a coalition with him.

Nevertheless, what, the NRC asks, if Wilders wins 50 seats in the March vote? Will the other parties still refuse to work with him?

Wilders himself has no doubts about his future role. He said in an interview in the AD last weekend that when he is prime minister, the current premier Mark Rutte will be a junior minister in charge of farm policy.

The effect of Trump’s victory on the economy of the Netherlands will depend on how much of his protectionist policies he is able to put into practice. His protectionism is ‘extremely relevant’ to the Netherlands because ‘the Netherlands is a major exporter to the US,’ points out analyst Diederik Brink on RTL Nieuws. ‘A breach in free trade will certainly have an impact on the Dutch economy.’

The uncertainty will last for years, said bourse analyst Hans de Geus. ‘Trump’s advisors are men of reason and I think it will all be okay in the end.’