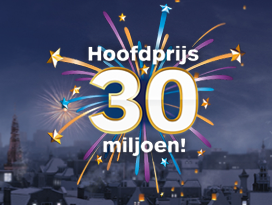 The Dutch national lottery has settled a case with a player who claimed to have been misled by the game.

The Staatsloterij secretly agreed last year to pay €4,250 to the man from Amsterdam, the Telegraaf revealed on Monday. The deal included a gagging clause that prevented him disclosing the amount or terms of the settlement.

The settlement was welcomed by the Loterijverlies organisation, which is looking to bring a class action on behalf of nearly 200,000 lottery players who say they were duped by misleading adverts. Last year it won a ruling from the Supreme Court that the lottery had exaggerated the chances of winning between 2000 and 2008.

Loterijverlies spokesman Ferdy Roet said the agreement was a ‘fatal blow’ for the lottery operator and said all claims should now be refunded. But Arjan van ‘t Veer, on behalf of the lottery, insisted the deal was a one-off settlement to stop the man blocking negotiations with other claimants.

‘This man from Amsterdam was threatening to take various forms of legal action and wanted to go to the media with his story just as we were in talks with claims organisations. We decided on a separate arrangement for him because he was holding up the process.’

Van ‘t Veer also insisted that the basis for the settlement did not apply to the Loterijverlies case. ‘In the case of this individual the circumstances were different and other arguments were used. We still have to establish if there is any question of loss by participants in the Loterijverlies action.’