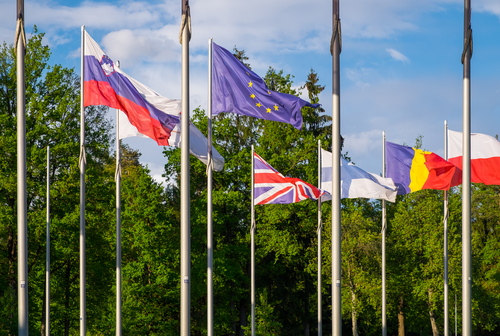 Will the Union Jack disappear from the EU line-up? Photo: Depositphotos.com

Eight out of ten Dutch voters expect the United Kingdom to trigger a ‘domino effect’ if it votes to leave the European Union on Thursday.

A poll by the EenVandaag tv programme found that 81% believed more countries would leave the EU in the wake of a Brexit. Overall, 69% had a negative perception of the future of the union.

Half of those polled said they wanted Britain to stay in the EU, but when asked if they believed it would happen opinion was split down the middle, with 42% on each side.

EenVandaag also found a narrow majority of those questioned (54%) wanted the Netherlands to have its own referendum on EU membership. Asked how they would vote, 48% said they would choose to leave while 45% preferred to stay in.

Supporters of Geert Wilders’ Freedom Party almost universally backed leaving the EU (94%), while the idea was also supported by Socialist Party voters (58%) and 50Plus (63%). The most enthusiastic pro-Europeans were to be found among supporters of D66 (85%) and GreenLeft (82%).

A total of 27,000 people took part in the survey for EenVandaag.