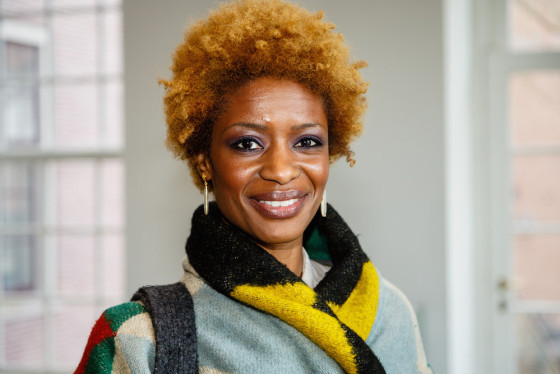 One of Dutch television’s few black presenters has joined up with a fringe political party in the hope of becoming an MP in next year’s general election. Sylvana Simons has joined Denk, the party set up by two former MPs for the Labour party who were expelled for refusing to back the party line on integrating immigrants, describing it as ‘exclusive’.

Simons, who started her career as a VJ on a Dutch music channel, has been outspoken in the Zwarte Piet debate and condemned a fellow guest on the tv chat show for describing refugees as ‘zwartjes’ (little blackies).

Her decision to sign up for Denk, which is widely ridiculed in the press as a party of pro-Erdogan whingers, created widespread comment in the papers. The Parool opened its front page with the story on Thursday, with an analysis entitled ‘Immigrants have had enough’.

‘Ebru Umar spent her time in prison in relative luxury,’ the paper quotes Simons as saying on news show De Wereld Draait Door. ‘But when I give my opinion, all I get is threats. Then there’s no one to support me. And there are no parliamentary questions about that.’

It’s a classic case of ‘what abouttery’. But also the language of people who, justified or not, feel they are the victims of a hostile society. Why should they have to work harder to prove themselves, why don’t they get jobs and why are they constantly asked to justify their religion? Simons might very well fan the flames of immigrant discontent, the paper concludes.

In the same paper, columnist Theodoor Holman is scathing about Simons: ‘What she said about Ebru on DWDD was loud, vile and rambling. I decided to have a look at what the MPs had to say about the Ebru affair. Not very much, it turned out. But the strangest thing of all was that DENK wasn’t there. It was preparing for that appearance on DWDD with Sylvana. How embarrassing. A party for immigrants that doesn’t turn up for a debate about immigrants.’

The NRC headlines its article with ‘TV star Sylvana Simons is going to decolonise politics’.

Her recruitment by Denk is ‘another sign that politics and entertainment are becoming more and more intertwined’, it says. The move is also ‘a PR success for a party that wishes to present itself not as a niche party for Muslims or people with a Turkish background, but as a platform for a much broader group of ‘Nieuwe Nederlanders’ who feel they are being treated like second-rate citizens’.

In a separate profile, the paper points that out that Simons is now being dismissed on social media as a ‘Netherlander hater’, a ‘whinging negro’ and an ‘Erdogan helpmate’.

These sort of reactions, the paper points out, support her view that racism is a major issue in the Netherlands. This ‘racist baggage’, she told a tv chat show, is what has driven her to dive into politics.