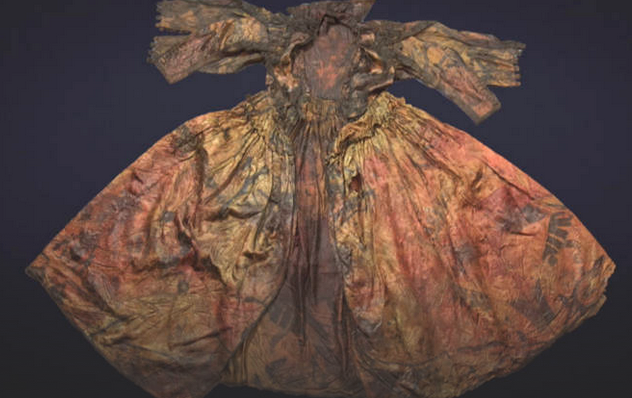 The 17th century silk dress found buried under sand off the Wadden Sea island of Texel was probably worn by someone who belonged to the royal court of the English queen Henrietta Maria, according to experts at Leiden and Amsterdam universities.

The queen was travelling to the Netherlands on a secret mission in March 1642 when one of her baggage ships sank in the Wadden Sea.

The gown is still remarkably well preserved and went on show at the Texel maritime museum earlier this month. A book with the coat of arms of the British house of Stuart led archaeologists to suggest there was a royal connection.

According to cultural historians Helmer Helmers from the University of Amsterdam and Nadine Akkerman from Leiden University the dress probably belonged to Jean Kerr, Countess of Roxburghe (c. 1585-1643).

She was a confidant of the queen and one of two ladies-in-waiting whose clothes went down with the ship. The style and size of the gown indicates strongly that it belonged to Kerr, the elder of the two.

Their findings are based on a letter written by Elizabeth Stuart (1596-1662), the Stuart princess who found refuge in The Hague after being exiled from the Kingdom of Bohemia.

In a letter to the English diplomat Sir Thomas Roe, dated 17 March 1642, Elizabeth describes how her sister-in-law lost a baggage ship during the crossing. In addition to the clothing of two ladies-in-waiting and their maids, the queen herself lost the ‘vessels’ from her private chapel in the shipwreck.

The official story behind Henrietta Maria’s trip to the Dutch Republic was one of royal connections: she was delivering her 11-year old daughter Mary to the court of William II, Prince of Orange and future stadtholder, whom the girl had married the previous year.

This was only a ruse, however. Her real mission was to sell the crown jewels and use the proceeds to buy weapons. These were essential for King Charles I to take on Parliament in the English Civil War. According to Akkerman and Helmers, the find at Texel represents a tangible reminder of the strong Dutch involvement in this conflict.

The two were able to solve the mystery of the dress reasonably quickly. ‘Once Helmer alerted me to the find, it took us about five minutes to unearth the relevant letter, as I remembered transcribing and deciphering it in 2006. We continue to find more references,’ Akkerman said.

‘It is a pity we weren’t consulted earlier – the puzzle would have been solved much more quickly,’ Helmers said. ‘The archeological experts have primarily focused on the material side. Of course this is important, but the historical texts also tell a thrilling story.’