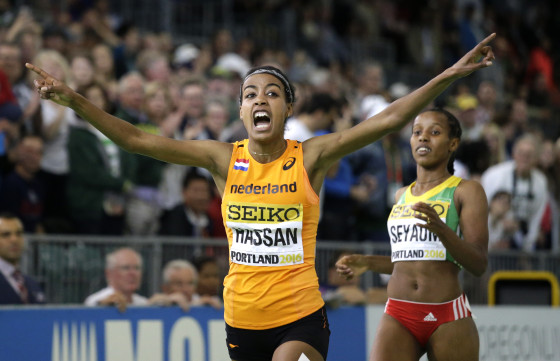 Dutch middle distance runner Sifan Hassan has won gold in the 1,500 metres at the world indoor athletics championships in Portland, the US.

The 23-year-old took control of the race with fewer than three laps to go, completing the distance in 4.04,96. Hassan, who was born in Ethiopia, beat Ethiopia’s Dawit Seyaum and Gudaf Tsegay into second and third place.

Hassan is current European indoor 1,500 metres champion and won bronze at the world outdoor championships in Beijing last year. She was a favourite to take the world title.

Dutch sprinter Dafne Schippers picked up a silver in the 60 metres, losing by 0.02 of a second to Barbara Pierre of the US. Schippers, who is the world 200 metres champion, took the European indoor 60 metres title in Prague last year.