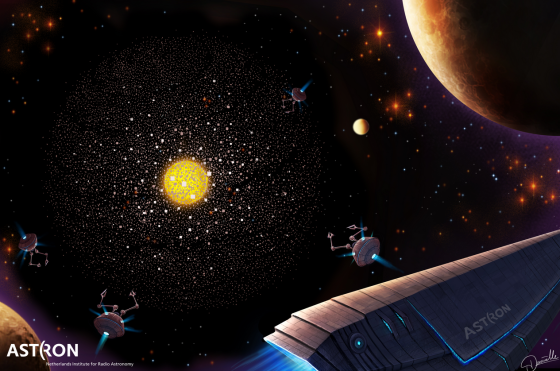 Sensitive new telescopes which allow astronomers to detect the waste heat that scientists believe will be a sign of advanced alien lifeforms show such civilisations are either very rare or entirely absent from the local universe, say astronomers in the Netherlands.

Professor Michael Garrett, of the Dutch radio astronomy institute Astron in Drenthe, has used radio observations of galaxies thought to be the best potential hosts for advanced civilisations and found that the emissions are best explained by natural processes.

Astronomers believe the waste heat is likely to be a signature of advanced civilisations which harness energy on a galatic scale, not just from their planet or star. They have named this type of civilisation Kardashev Type III.

‘Original research from Penn State has already told us that such systems are very rare but the new analysis suggests this is probably an understatement and that advanced Kardashev civilisations basically don’t exist,’ Garrett said.

‘In my view, this means we can all sleep safely in our beds – an alien invasion does not seem at all likely.’

Nevertheless, the professor says it is ‘a bit worrying’ that Type III civilisations don’t seem to exist, because this is not what physical laws predict.

‘We are missing an important part of the puzzle here,’ he says. ‘Perhaps advanced civilisations are so energy efficient that they produce very low waste heat emissions.’

Garrett now has plans to look for less advanced civilisations, described as Kardashev Type II, which would have more limited energy resources. ‘What is important is to keep searching for the signatures of extra-terrestial intelligence until we fully understand what is going on,’ he says.

Earth is not yet considered to be on the Kardashev I scale.

The results of the research are being presented in the European journal Astronomy and Astrophysics.