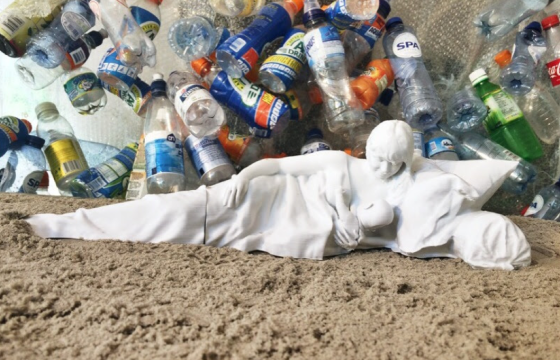 A Dutch artist is planning to turn 100,000 plastic bottles which have been dropped as litter into a giant sculpture of a Madonna and child to draw attention to the growing problem of plastic soup in the oceans, writes Nicola Chadwick.

Peter Smith (52), founder of the KLEAN foundation, has asked top Dutch model Doutzen Kroes to pose for the 12-metre long sculpture, which will be printed in 3D and, he hopes, placed on the beach at Rio de Janeiro during the 2016 Olympic Games.

Five years ago, Smith made a huge globe from plastic bottles found on the street. The World of Litter was displayed in Amsterdam’s River IJ and Rotterdam’s River Meuse. This project, he admits, is much more ambitious. ‘We want people to pick up one PET bottle to prove the principal that we can solve the problem of plastic soup by doing almost nothing,’ he says.

Reseach shows an estimated eight billion kilos of plastic is ending up in the sea every year. ‘For centuries the Dutch have been rescuing the land from the sea, now we have to rescue the sea from the land,’ says Smith.

He is asking the public to donate just one euro and/or one plastic bottle to be melted down. The Plastic Madonna herself will be made from bottles collected by volunteers all over the Netherlands and the baby from bottles donated and picked up during beach clean-ups in every country in the world.

Smith, who has become a TedX speaker and regularly visits schools and companies with his message, says his philosophy is simple: ‘When a problem is this big, you have to start with the smallest thing you can do.’

The project has been partly inspired by Dutch astronaut and environmentalist Wubbo Ockels, who made a last emotional appeal last year from his deathbed to the world. His wife Joos Ockels has become patron of the project.

The growing problem of plastic soup in our oceans was first discovered by Charles Moore in 1997. He noticed during a voyage from Hawaii that the Pacific was becoming ‘a disgusting, plastic cesspool’.

Since then, gyres (islands of floating plastic) have been found in each of the world’s five oceans. Alongside the discarded plastic shopping bags, bottletops, sweet wrappers, food packaging and fishing nets are microplastics.

According to the ASC Microplastics Project, ‘these particles, which are smaller than five millimeters in size, likely pose a massive environmental and human health risk when they enter our natural waterways’

Only 20% of plastic soup has come from ships. The other 80% is caused by land litter which has been washed into drains, rivers and seas. In recent years, its growth has been exponential as more and more litter is dropped in the street.

Nevertheless, Smith points out only 12% of people drop litter and if one in four people pick up litter (once a day every day) there would be none left.

Find out more at PlasticMadonna.com