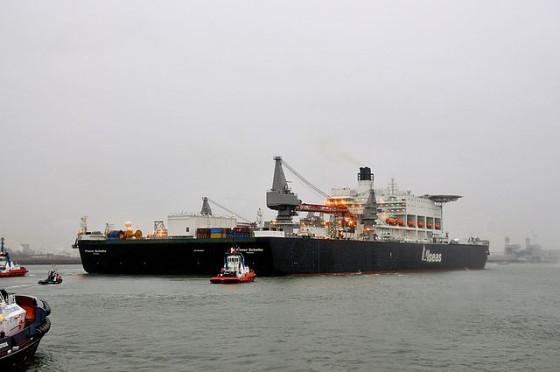 The Dutch company which owns what is said to be the biggest ship in the world has agreed to change its name because of links to a Nazi war criminal.

The Pieter Schelte, owned by maritime services groups Allseas, is named after the company’s founder, who joined the Waffen SS during World War II and was later convicted of war crimes.

Allseas had refused to change the ship’s name, despite a 10-year campaign by Jewish groups, but has now bowed to pressure, the Financial Times reports.

The paper says the change of heart came after British energy secretary Ed Davey said the naming of the ship was ‘wholly inappropriate and offensive’.

Allseas, which is based in Switzerland, said in a statement: ‘As a result of widespread reactions which have emerged over the past few days, Edward Heerema, president of Allseas Group, has announced that the name of the vessel ‘Pieter Schelte’ will be changed. It has never been the intention to offend anyone. The new name will be announced within a few days.’

Esther Voet, director of the Dutch Centre for Information and Documentation on Israel (Cidi) told the FT she was delighted. ‘It was the right thing to do and it is only a pity that it took 10 years for the owner to see that the name really is not appropriate,’ she said.

Shell, which is planning to use the ship to decommission North Sea oil platforms, also welcomed the decision. ‘We have made our feelings clear to Allseas and are pleased they have decided to change the name of the vessel,’ the Anglo-Dutch oil giant is quoted as saying by the FT.