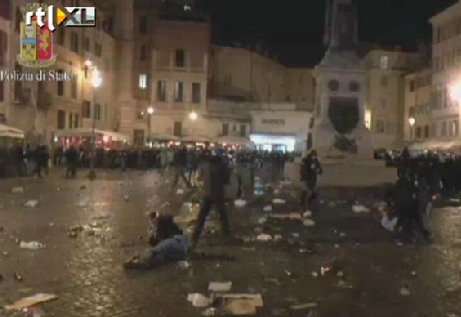 Eight Feyenoord football fans have been given individual fines of €45,000 and banned from attending tonight’s game against AS Roma following crowd trouble ahead of the match, RTL news says on Thursday.

The supporters were arrested on Wednesday night after crowd trouble broke out in the city’s Campo dei Fiori square where supporters had gathered. Many were drunk, urinated against monuments and threw bottles at police, RTL says.

The supporters were all given six-month jail terms in the fast-track legal hearings, which were converted into the high fines. Vandalising ancient monuments in Italy carries heavy penalties, RTL says.

In total, 33 people were arrested but 10 were released almost immediately. The 15 who have not yet appeared in court will be brought before judges as soon as possible, local papers say.

There was further trouble in Rome on Thursday afternoon, this time focusing on the famous Piazza di Spagna. A number of people were injured as riot police moved in after fireworks and smoke bombs were thrown.

Italian news agency Ansa described the aftermath as looking like a battleground. The ground was strewn with bottles and rubbish and several mopeds had been damaged.

Feyenoord plays AS Roma in the Europa League on Thursday evening. Some 6,000 Feyenoord fans are thought to be in the city.