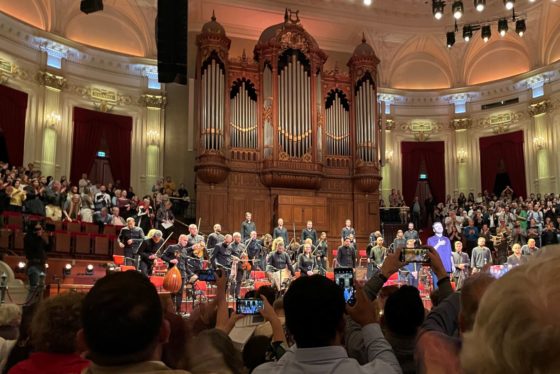 The ‘Concertgebouw audience’ is shorthand for a certain kind of crowd. But not, found Senay Boztas, at the experimental Holland Festival.

The words were English, Turkish, Urdu, Arabic, the musical instruments came from all over the world, and the crowd looked quite, quite different from a normal Concertgebouw audience.

When Sami Yusuf – a Brit, born in Iran to Azerbaijani parents – joined the Amsterdams Andalusisch Orkest and classical Cappella Amsterdam group on stage for the Holland Festival, something unusual happened. Not only was the music – and the range of international instruments – extraordinary, but so was the way it was received.

The crowd clapped along, swayed along, looked alive and excited. A few people arrived a bit late, squeezed in and joined the mood. The cheers at the end for Yusuf – who writes self-consciously spiritual and religious music inspired by traditional music and poetry – were like a pop concert.

The same was true for Angélique Kidjo, Beninese singer songwriter, who sang everything from the modern classical Ifé by Philip Glass to her blockbuster singalong Afrika. The Concertgebouw audience got up, whooped, danced and called for more. Whether they were calling the traditional Concertgebouw ‘bravo’ or simply giving huge fan adulation, it was all good.

This is one of the joys of the Holland Festival, which this year celebrated 75 years of inviting sometimes challenging and experimental but always memorable performers to Amsterdam.

The festival does not record audience background, but from a visual scan of the crowd it was obvious at the Yusuf concert that things were different from normal: people were younger, wearing colours, often headscarves, and instead of a run on the free wine before and after the show, the orange juice and water were in strong demand.

While the Concertgebouw is known for having one of Europe’s best acoustics, the crowd that goes is sometimes used as a synonym for crusty old Holland: white, posh, and old. A Holland Festival audience, it’s easy to observe, is a lot more fun – with a programme that ranged from making a climate change ‘manifesto’ on the roof of a car park to a two-hander play reworking Camus’ The Stranger from the point of view of the murdered ‘Arab’s brother.

Emily Ansenk, director of the Holland Festival, said that attracting a more diverse crowd is one of the side-effects of bold programming.

‘Holland Festival programming has always been diverse and welcoming,’ she said. ‘My predecessor Ruth Mackenzie made important steps in that respect and our associates also contribute to colourful, diverse programming, because they have a very broad and generous frame of mind and seek out collaborations with artists who otherwise might not have found their way onto the Holland Festival stage so quickly.

‘We add something to the Dutch field by programming makers and performances that have something extra to offer, either through their complexity or their form.’

Given the enthusiastic response of the audiences at the top shows this year, there are all kinds of Dutch people who want to step out of their bubble and glimpse this ‘big world’ – and the venues and the experience are all the richer for it. Here’s hoping that the cultural world, in desperate need of audiences again, realises that there are plenty more people out there, if you open the doors.

The Holland Festival ran this year from June 3 to June 26. Dutch News was a guest of the festival.