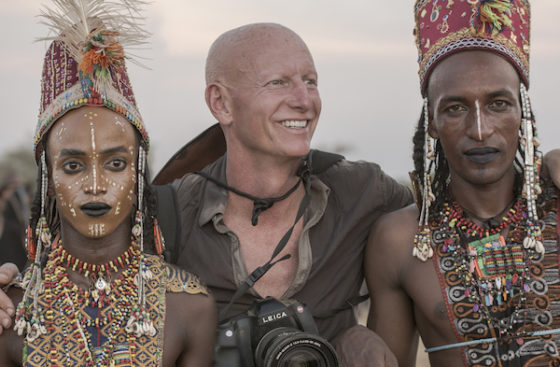 Artist Jimmy Nelson (52), originally from the UK, is best known for his photographs of indigenous people. His work has taken him to many unexplored corners of the earth, but Amsterdam is home to him and all three of his passports are Dutch.

How did you end up in the Netherlands?
I met my [Dutch] ex-wife in Greece when I was 23. We had a two-day fling then I had a two-year assignment in China to photograph a book. She came with me after knowing each other for two days, and then at the age of 25, after the assignment, she came back to Holland and we got married and I’ve been here ever since.

How do you describe yourself – an expat, lovepat, immigrant, international etc?
An adopted Dutchman. I don’t have English passports – I have three Dutch passports. I travel a lot. They are often here, or they’ve been stolen, or they’re in the wash, or they’re collecting a visa… Although I have an English education and used to have an English passport, I never felt an affinity towards the UK. I left when I was 17.

How long do you plan to stay?
I will have a base and a pied-à-terre here forever, until the day I die. I love the Netherlands. I feel Dutch. I have three Dutch young-adult children, all my friends are here, and my life is here, and I wouldn’t go anywhere else. I spend about 80% of my time travelling, but it will always be the base that I come back to, to wash my hair – not that I have any! – and clean my clothes.

Do you speak Dutch and how did you learn?
Yes, I speak Dutch. For a non-Dutch speaking person, it sounds amazingly impressive; to a Dutch native, who’s very direct and honest, they will say I speak Jip en Janneke Nederlands. My kids often chastise me. They say, ‘Dad, don’t speak Dutch. Don’t pretend!’ It’s fine, but you can tell that I taught myself in an auto-didactic, organic fashion. I didn’t have any lessons; I went with the flow with my kids as they grew up, so I spoke English with them, but their friends would come in and I would speak Dutch with their friends.

Can it be three things? Directness, bicycles and Schiphol.

Directness is very simple [to explain]. When I grew up in the UK, at a boarding school, when there was a problem – and there were a lot of problems – they would close the curtains, have a cup of tea and talk about the weather. In Holland, when there’s a problem, they open the curtains, put on a pair of dirty knickers, turn on a red light bulb and have a joint. The attitude is ‘this may be unpleasant, but let’s deal with it all’. If you come from what I experienced as a child [Jimmy was among many children sexually abused by the staff at his school], you need directness and honesty to survive and be healthy.

The bicycle – because it’s the definitive form of transport. I haven’t had a car for ten years. When I first came to the Netherlands, I was all about sports cars and spending every last penny on a car. I now have three bicyles: an old bakfiets, an e-bike, and an omafiets.

Schiphol – because by Uber it’s 15 minutes from my studio and my studio is ten minutes from where I live, so it’s extremely convenient. I think it’s the most amazing airport on the planet. Whenever I come back from a journey, I kiss the floor.

How Dutch have you become?
When I travel, I say I’m Dutch. I say I’m from Amsterdam and I feel it. I’ve always been looking to belong somewhere. I was a nomadic child, I lived in an institution for ten years – I didn’t belong there and it kind of destroyed me. I spent the whole of my adult life trying to stick myself back together, and with the love I’ve received from the Dutch and their culture, I’m getting very close to completing that project.

It’s more a spiritual and metaphysical question for me. I don’t want to learn technique from them – I have my own technique. I’m very busy with my own auto-didactic process and that’s very fulfilling, and I’ll spend the rest of my life trying to fathom that.

What’s your top tourist tip?
Rent a bakfiets and drive your lover around for hours and hours and hours, very early on a Sunday morning in the wintry mist, with a nice jacket and a scarf and a pair of gloves and a warm thermos flask of tea and a bag of nuts. At four o’clock in the morning, before everybody’s awake on a winter’s day, you’ll have the time of your life – very romantic!

Tell us something surprising you’ve found out about the Netherlands
I think they are some of the most travelled people on the planet. I haven’t got a scratch map, and I don’t count the countries I visit, but wherever I go, I come across Dutch people. For such a small nation, that says an enormous amount about how world-wise they are.

If you had just 24 hours left in the Netherlands, what would you do?
I would sit in a bakfiets and drive incessantly for 24 hours around the canals with the love of my life – which I don’t have and haven’t met yet, so that’s a sort of aspirational wish!