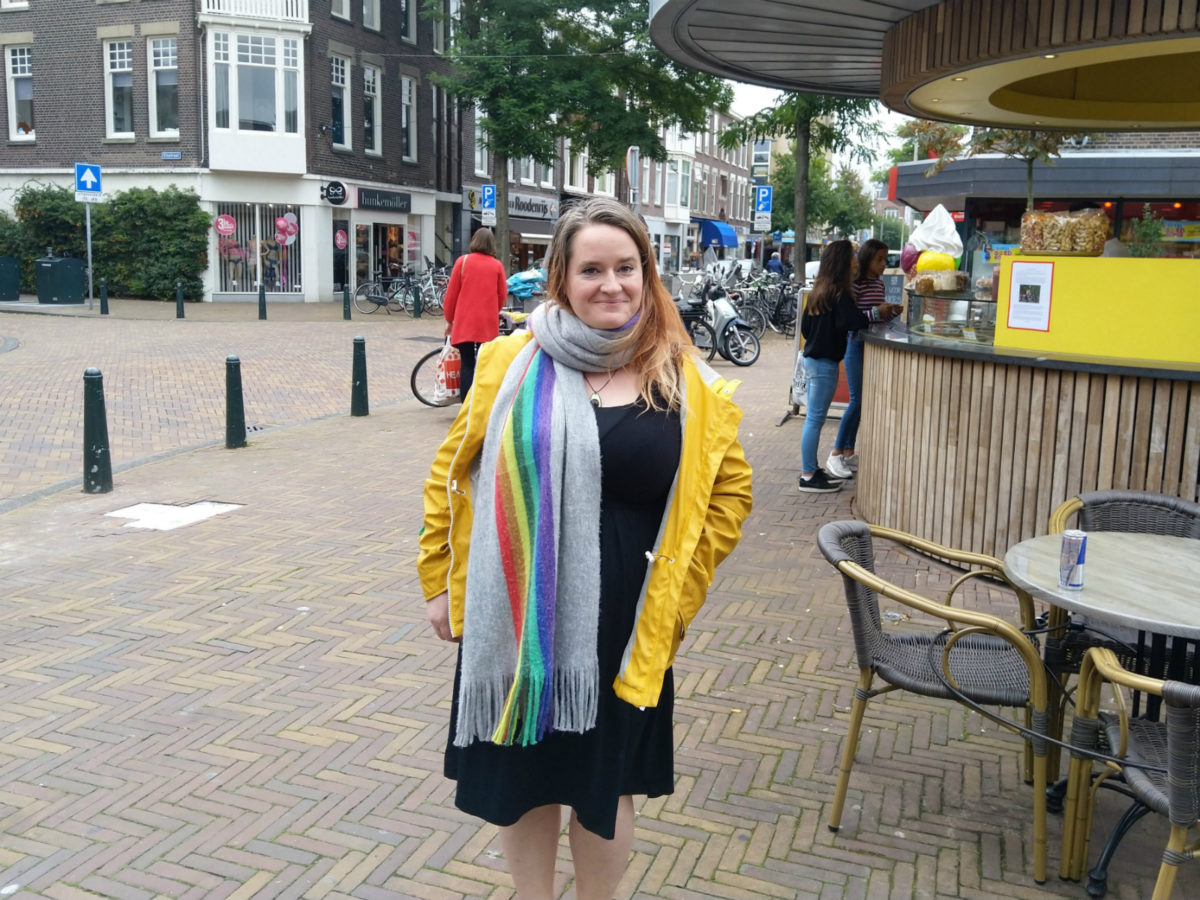 How are British nationals in the Netherlands coping with Brexit? In the run-up to October 31 and beyond, we are talking to Brits about how Brexit is affecting them personally, what they are planning to do to regulate their stay, and how they view the UK.

Matty Mitford, 42, moved to Amsterdam in 2013 as a campaigns organiser and is currently studying graphic design in The Hague. She plans to take Dutch nationality so she can remain an EU citizen after Brexit.

‘I moved to Amsterdam six years ago when I was hired to work for a Dutch NGO called The Black Fish, which investigates illegal fishing. Since then I’ve worked for Wetlands International and done some freelance work for a Jewish organisation in the UK, and now I’ve gone back to university to study graphic design.

‘I didn’t expect to stay here permanently, but I had the experience a lot of people have when they come here thinking we have the same standard of living in the UK, and I don’t think it’s true. It was a shock. Since then I’ve sold my house, I’ve moved everything that I had here and my mind is absolutely made up. I have no intention of going back.

‘My husband is German but has dual nationality and still lives in the UK. He studied there and he’s worked as a lawyer in London since he left university, so his citizenship application was very straightforward. But even though he’s in an industry where people come from all over the place and he’s kind of protected, he feels like questions are being asked in a way that they weren’t before. It used to be that when people talked about immigrants he’d say: ‘But I’m an immigrant’ and they’d say, ‘well, we don’t mean you’. But now he feels like they probably do mean him.

‘I was pretty certain the referendum would go the way that it did, because I used to be head of campaigns for the Green Party and I spent a lot of time knocking on doors and talking to people about politics. I knew there was a very big group of unrepresented people and I knew how they felt.

‘I was working for Wetlands International on the day and I happened to sit next to the only other English person in the office, so he put up a sign above our desk that said: ‘Don’t ask us about the stupid Brexit, we’re too mad!’ People talk about it more now it’s become more dramatic, but it’s mostly sympathy, I think. Dutch people say to me, ‘What about this stupid thing?’ And then I start explaining and they remember it’s actually about real people.

‘Although I moved here in December 2013, I’ve not lived here for six continuous years, because I had to go back for three months and look after my mother in London. So I have to wait another six months before I can become a Dutch citizen. It’s a gesture, really, about being European, but it’s also a safety measure. My husband and I got married so that I’ll still be married to a European citizen after Brexit. But I don’t want my life here to be dependent on somebody else, even if it’s him. I’m not a Dutch person and I never will be, but I am European and just having residency doesn’t feel like enough.

‘There are two things that make me worry about giving up my British passport. One is my mother’s health, because I’m an only child, so if she needs to be looked after it falls to me. The other thing is that the UK is the only country where I can build up a full state pension, but who knows what the pension harmonisation rules are going to be after Brexit?

‘It’s the not knowing that’s so hard. At the moment it’s easy to travel to the UK. It’s like getting a train to Groningen. You don’t have to think about it. But when you live away from your family and the people you care about, sometimes you have to go back quickly and frequently, and I don’t know what the impact’s going to be. My mother has heart problems, and once when she was recovering we brought her over and I took care of her here. We could do that because she was a European citizen. And now you wonder what it’s going to be like next time.

‘From a personal point of view it would be great if Brexit just went away and they revoked Article 50. But I worry more about the divisions that have grown up in our society. Because if I get what I want, a huge number of people don’t get what they want, and don’t think anybody knows how to fix that. I just feel sad for the UK. Nobody gets anything good out of this. People who voted Remain are completely unrepresented and an awful lot of people who voted for Brexit did not vote for what’s happening. The only people who will get what they want are people who will make money out of a no-deal Brexit.

‘I’d be happy to be Dutch because I feel a very deep affection for this country. It’ll be nice to be attached to something that makes sense. But it’s a bizarre feeling to imagine you’re not British any more. London is still the place where I grew up; it’s still who I am. I’ll still be exactly the same person whichever passport I have, so it shouldn’t make a difference, but for some reason it feels like a massive step. And I will leave it right until the last minute. But things like settled status and residents’ permits and stuff can change in a way that nationality can’t. Particularly if you’ve had experience with the British Home Office and seen people whose grandparents arrived on the Windrush told they have to go “home”, you understand that nothing’s safe. So I’ve taken the decision to protect myself.’